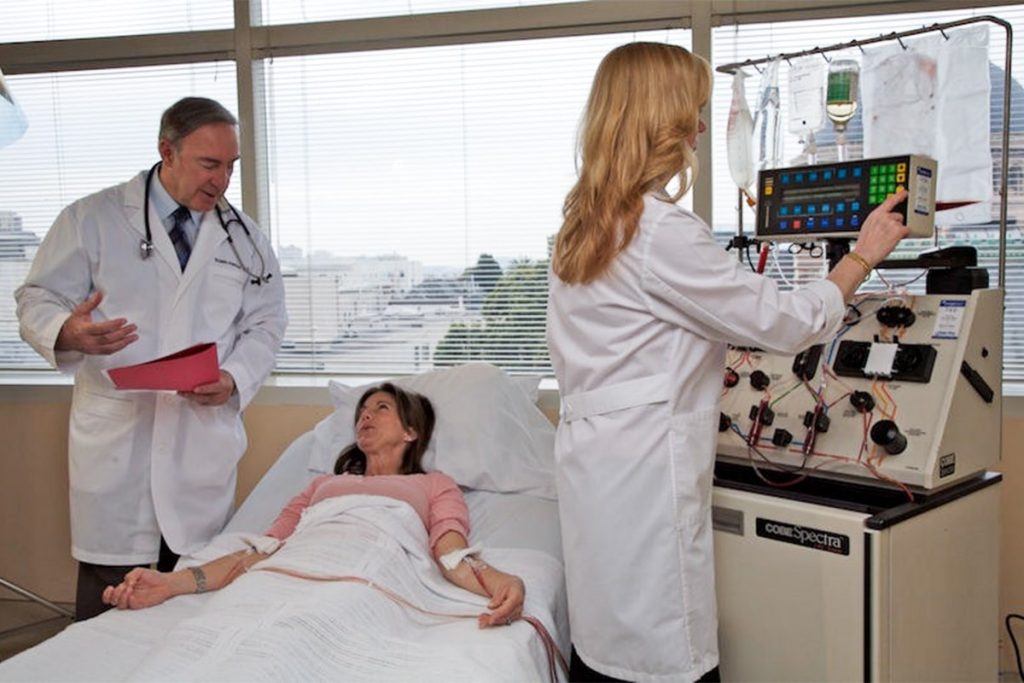 A new clinical trial is hoping to move the needle on therapeutic plasma exchange – and is looking for participants.

Plasmapheresis is a procedure that removes plasma from whole blood, swapping out unhealthy plasma and replacing it with healthy donor plasma or a plasma substitute. Plasma is part of blood, a fluid made up of water, proteins and essential nutrients. In certain diseases, as well as in aging individuals, certain harmful substances accumulate in plasma and may lead to organ damage. Plasma’s regenerative capacity means it also has potential to target multiple diseases of aging. Lyfspn, a company backed by Khosla Ventures, is conducting a plasmapheresis trial in the Bay Area for longevity benefits – and is actively seeking trial participants, particularly those from the biohacking community.

Longevity.Technology: The trial is being led by Dr Dobri Kiprov, a recognized expert in the field of apheresis, who became a co-founder of Lyfspn, Inc and serves as its Chief Medical Officer. We sat down with Dr Kiprov to find out more about the trial and plasmapheresis’ potential for longevity interventions.

The idea that plasmapheresis could aid longevity started, as is so often the case, in mice, in an experiment called parabiosis. It was shown that when two mice – one old, one young – are connected through their skin, the end result is common circulation, with the blood of each animal, in effect, diluted by 50% and the young mouse experiencing accelerated aging and the older mouse benefiting from rejuvenation.

However, Dr Kiprov explains, experiments over the last seven or eight years to discover exactly what it is in the blood that causes this rejuvenation have failed at a cost of millions of dollars. A change of approach was needed.

“Last year we published other experiments in mice, that didn’t involve connecting two mice,” he explains. “Instead, we transfused blood from mice into another – a process we call dilution – and we saw the same beneficial effects occurring.”

From mice to people

On the back of this research, Kiprov hypothesised that these experimental models could be modified and translated to humans, and he suggested plasmapheresis. As ever in research, an answer leads to a question, which was in this case, if the plasma is removed, with what should it be replaced?

Although using ‘young plasma’ from donations was proposed, this is a practice to which Kiprov is adamantly opposed.

“I have over 30 years of experience in therapeutic plasma exchange,” he says. “Infusing plasma as part of the protocol is associated with significant side effects and, on occasion, death – so we are not planning to use human plasma!”

Instead, the current research protocol uses 5% human albumin. “This is actually considered a pharmaceutical product,” says Kiprov. “Athough it’s made from human blood product, it has been chemically manipulated to ensure its safety.”

The plasmapheresis protocol used by Kiprov is especially effective for autoimmune disorders because it removes certain autoantibodies and proteins that attack self tissue, which is abnormal behaviour because the immune system is designed to recognise self tissue.

“And it works,” says Kiprov. “We now treat more than 80 autoimmune diseases with plasmapheresis, very successfully.”

Gearing up for a new clinical trial

So how will the new trial build on existing successful trials and Dr Kiprov’s current research?

“We are now expanding our initial experiments into working with humans and hope to enrol a significant number of participants, around 40 to begin with,” he says. It’s a randomised clinical trial with a placebo group, and although different groups will receive the same treatment, Kiprov and his team are really looking at how the results change when the schedule is varied. They plan to test a range of schedules from one treatment a month, up to two treatments a week, and repeating the program for a period of three months.

“We are also using several independent laboratories to see if they can replicate what we have seen so far, using a combination of reputable epigenetic clocks – including Dr Horvath’s – which identify actual biological age,” adds Kiprov.

The original protocol called for monthly treatments over a period of six months and this produced good results, but upping the treatment also ups the dilution and this where Kiprov and his team saw an added benefit.

It’s more than taking out the trash

“What else became obvious from the original research is that the effect isn’t just the removal of bad substances from the blood,” he explains. “This is something people don’t pay close attention to, but plasmapheresis, probably by the removal of certain substances, actually causes immunomodulation – the whole immune system functions differently, and, for the most part it functions better after plasmapheresis, with an increase in certain beneficial factors in the blood. This is one of the most exciting findings, but it’s a complex process that warrants this further research.”

Dr Kiprov says that one of the most significant issues with old age and longevity is to see if plasmapheresis will be able to prevent diseases.

For all practical purposes, people do not die of old age, they die of diseases,” he explains. . “So, if we can prevent the diseases associated with old age then we can improve healthspan, which may lead to longer lifespan. The results from our work are encouraging so far – the next step is to prove it in a controlled, scientific manner.”

The researchers are performing multiple tests, building towards a scalable therapy.

“The ultimate goal is to have enough information to be able to push the concept of prevention with insurers – pushing the idea that keeping people healthy saves money as well as saving lives. There is still room for education, but things are starting to turn around.”

Being part of ground-breaking research

Dr Kiprov is recruiting participants who are over 50 and under 85 – he hopes to be able to lower the minimum age in the future, however. Exclusion criteria include those with active cancer or active infection and other medical contraindications and Kiprov is also ruling out those taking medications unproven for longevity in humans, such as rapamycin.

Those interested in participating can reach out to Lyfspn‘s CEO, Uri Greenwald, at [email protected].