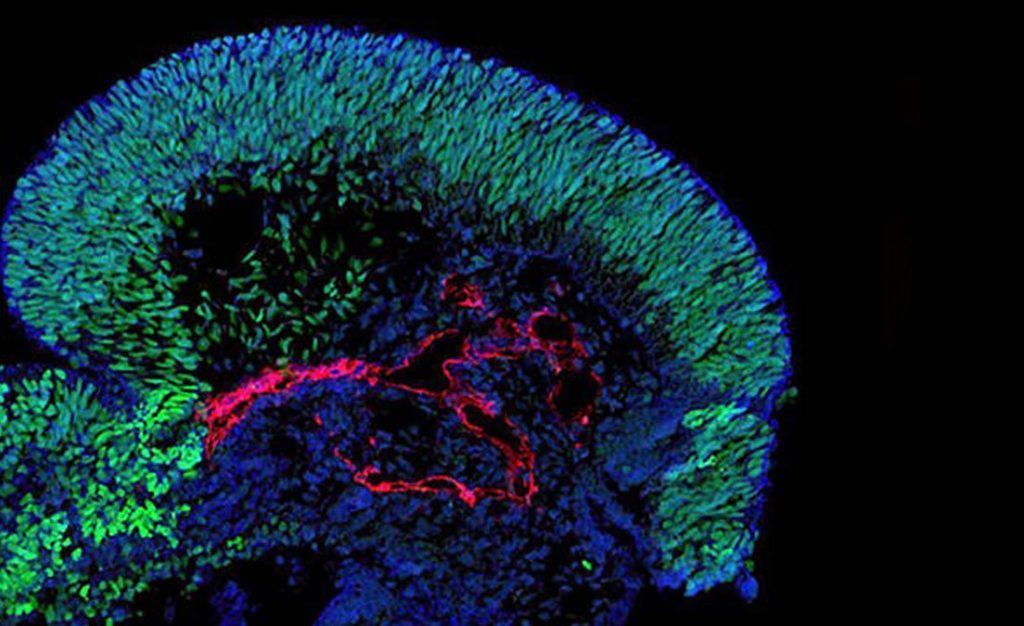 Scientists at the University of Würzburg recently announced they have successfully produced human tissues from stem cells that have a complexity similar to that of normal tissue. The complex three-dimensional tumour and brain organoids developed in the Petri dish feature functional blood vessels, connective tissue and, in the case of the brain tissue, also brain-specific immune cells.

The scientists claim that the miniature organs they have produced are “far superior to previous structures.” We spoke to anatomist Dr Philipp Wörsdörfer, who co-authored the paper published on the research in the journal, Scientific Reports.

Longevity.Technology: Apparently your tissue is “far superior to previous structures” – can you explain in what way?
Dr Wörsdörfer: We believe that our tissue models are “superior” to many organoids that have been grown from stem cells in the lab before, as they contain the supportive framework of tissues, so-called stroma. Stroma, the connective tissue, consists of mesenchymal cell types and blood vessels, for example. So far, methods for the generation of organoids mostly focused on the parenchyma, which is the “functional” part of the organ.

Longevity.Technology: What makes stroma so important in organ development?
Dr Wörsdörfer: Incorporating stromal components is of interest because tissue development requires multilineage communication, which means that several cell types communicate with each other to induce further differentiation steps boosting tissue maturation. It has been shown that during liver or lung development, such kind of communication is necessarily required.  In particular, stromal cells (mesenchymal cells, cells of the vessel wall) and the parenchymal cells (lung epithelial cells, hepatocytes) are involved in this process. We expect that organoids including the stromal compartment will be more mature regarding structure as well as function.

Similar to tissue development, disease development and progression also happens in a tissue context involving several cell types. For that reason, we believe that organoids including stromal components are better models to study disease mechanisms and also for drug screening applications. In addition, the growth of organoids in the lab is limited by a proper supply with oxygen and nutrients. This is because the tissue structures rely on supply via simple diffusion from the culture medium. This results in large areas of cell death in the organoid centre. Functional vascularisation will be the key to solve this issue.

Longevity.Technology: What are the next steps for you with this research, and when might this approach be used to grow tissue for animal and ultimately human transplantation?
Dr Wörsdörfer: The next steps will be to connect the lab-grown vascular network to a circulatory system and to find out if this will firstly improve vessel maturation, and secondly allow vascularized organoids to grow to larger sizes and reduce cell death. Moreover, we will investigate the impact of the stromal compartment on the parenchymal compartment and try to model diseases in our improved organoids. In addition, we will further investigate the contribution of tissue resident macrophages. These cells of the immune system are also generated from mesodermal progenitor cells and can be found in our organoid models.
We will first continue with the brain organoids as they are already established in the lab.  Moreover, we are also interested in other tissues such as the heart.

Longevity.Technology: What do you see is your expected path towards commercialisation of your work?
Dr Wörsdörfer: Our focus is basic research. We try to understand mechanisms of human embryonic development and disease. However, we of course see the potential of organoids especially with regard to disease modelling and drug screening applications. Moreover, mesodermal progenitor cells are an interesting cell source for bioprinting applications.
The TRL score for this Longevity.Technology domain is currently set at: “Early proof of concept demonstrated in the laboratory”:

The TRL score for the technology addressed in this article is: “Early proof of concept demonstrated in the laboratory”.