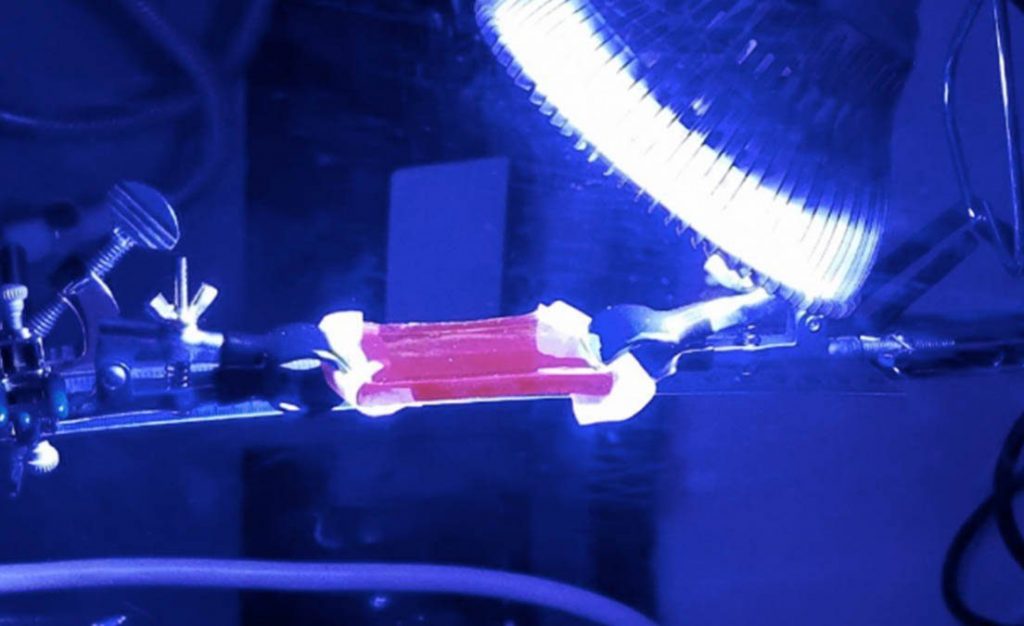 A new hydrogel that is responsive to light is set to push boundaries in the 3D bioprinting market.

Organs age and fail and being able to produce replacements to order, rather than leaving patients languishing on transplant lists has been high on the Longevity ‘to do list’ for some time. Enter 3D bio-printing, a process involving mixing cells taken from the intended organ recipient with growth factors to create a hydrogel which is then ‘printed’ layer-by-layer to create tissue-like structures that imitate nature. Scaffolds can be created to facilitate tissue regeneration, or increased growth of certain cells, for example, stem cells, outside the body.

Longevity.Technology: Despite recent hiccups, the global bioprinting market is expected to reach $4.1bn by 2026 [1]. Clinical successes in this area would provide replacement organs as well as valuable tools for research that would speed up clinical trials and produce more specific data sets. We like the savvy multi-dimensional approach the WUSTL team is bringing to their research.

Most of our body parts change shape – they grow, and, like tendons and muscles, some of them contract and expand. A team from Washington University in St Louis wanted to create a material that would contract and expand in response to stimuli, just as human tissue does. Working with hydrogels ticked those boxes for the team, as they could incorporate their new polymer into a pliant, flexible material called a hydrogel.

The polymer is redox-responsive, meaning it contracts when electrons are added (reduction) and expands when they are taken away (oxidation). It achieves this by having visible-light-absorbing photoredox catalysts embedded in the gel that cause the polymer to change colour and contract when exposed to blue light.

As Jonathan Barnes, assistant professor of chemistry and co-lead author explains: “We’re using the photocatalyst to absorb light and transfer an electron to our polymer, which actuates the material. As soon as we turn off the light and the material is exposed to oxygen in the ambient air, it reverses the process. It’s kind of like a sponge. When we push all the water out, it’s smaller, but then when you drop it back in water, it will swell back up. It’s the same kind of process as in natural, mechanical systems, like muscles.”

Because the long chains of polymers fold and wind up in three dimensions, the hydrogel can contract down to just one-tenth of its original volume, before expanding back to its original shape and size. What is even more remarkable is that the hydrogel contains just 5% polymer in total, and 95% of that is just water. So, only 0.25% of the total hydrogel is made up of functional polymer, an interestingly-small number for anyone with an eye on future profits [2].

“A lot of people said we would never get the amount of contraction we were hoping for,” Barnes said, “but it actually worked better than we ever imagined [3].”

The original hydrogel was created last year, but the team have recently announced that they have been fine-tuning the chemistry and have now developed a new responsive polymer that can carry heavy loads making it suitable for prosthetics or replacement organs in the future. The researchers used a polymer currently used in contact lenses because it is biocompatible, elastic and able to support 3D cell networks.

Co-lead author Faheem Amir, explains that the team wanted to address a current technology gap: “Cells within living systems face a 3-D environment, yet most of the studies that are done on cells are done on 2-D materials [4].”

Another focus for the revised polymer research was to be able to activate only very specific and precise locations in the hydrogel. The team have reported “precise spatial resolution and control over where activations took place [5]” and the activations were reversed when oxidation took place.

The next step for the team is to refine activation across the three dimensions while demonstrating the durability of the hydrogels. The team will also be researching activation by other wavelengths of light, especially infrared, as this would allow non-invasive applications to be developed. Jonathan Barnes told Longevity.Technology: “External triggers can mean visible or near infrared light, or even a low-voltage electrical current.”

After the that, the next steps will be to see how well actual cells can be incorporated in bioinks and how easily the hydrogel and bioink combination will perform under 3D printing conditions. As Jonathan Barnes told Longevity.Technology: “The future hope for this area of research is that one day scientists may be able to grow organs, but this reality is still pretty far off.”

We spoke to Jonathan about which organ or tissue might be a future target for this technology and he told us: “There are many different sub-tissue types that this technology could work for. Some people are interested in culturing heart cells (cardiomyocytes), and others have looked at muscle cells, stem cells, etc. We currently have a collaboration going through our med school where we are investigating the development of cilia cells (which can be found in your airways and are responsible for moving mucus and trapping external pathogens). This is important for understanding and ultimately treating diseases like cystic fibrosis for example. Prosthetics could be one potential application, however, it would more likely be a hybrid material that may use our materials to interface with a hard plastic material so the connection to a person is less abrasive.”

And his thoughts on the technology’s application to later-life muscle wastage – could it help keep the elderly more ambulatory for longer, for example? “This type of application will take several more decades of research before an application such as this could be realized in patient care.”