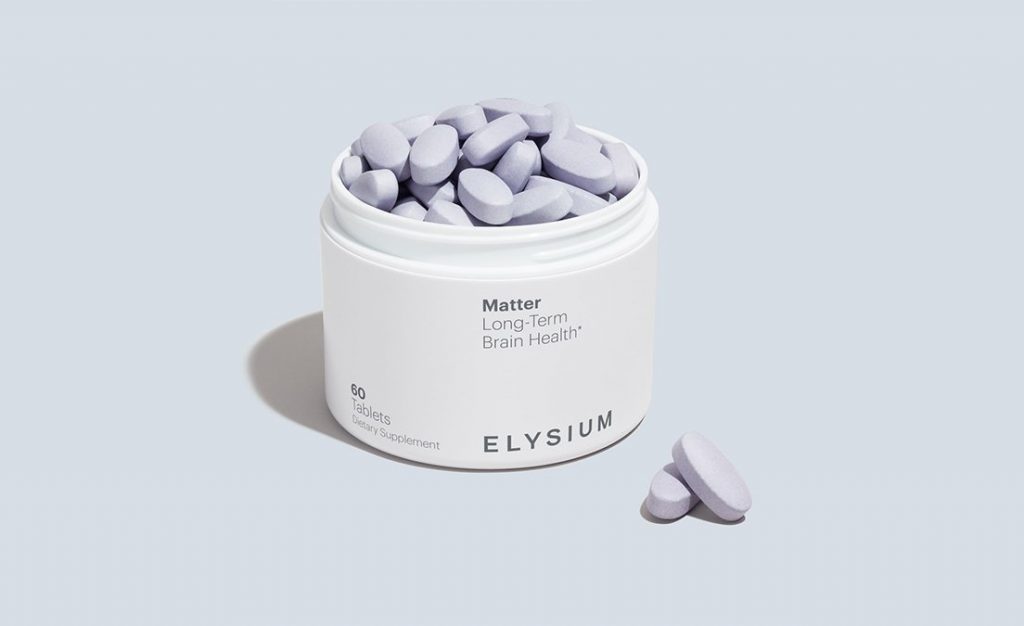 While many of the developments in the Longevity sector have some way to go before commercialisation, New York-based Elysium is again bucking the trend with the introduction of its second Longevity consumer health supplement. The company today announced the launch of MATTER, a long-term brain health supplement developed in partnership with the University of Oxford.

Longevity.Technology: Age-related brain shrinkage is a hallmark of the aging process. Over the human lifespan, the whole brain atrophies by as much as 20% in healthy adults. Brain shrinkage affects grey matter regions involved in complex behaviours such as decision making, memory, and executive function. Lifestyle factors, such as smoking, poor sleep habits and excessive alcohol consumption have been shown to accelerate the progressive decline in grey matter volume.

Matter contains a formulation of specific B vitamins that is clinically proven to slow brain atrophy associated with age-related memory loss. It also contains a powdered omega-3 lysine complex with enhanced bioavailability to optimise efficacy of the B-vitamin complex, and an anthocyanin-rich bilberry extract to provide complementary cognitive benefits.

“Brain atrophy is a hallmark of the aging process that has been a near-unsolvable challenge for neuroscientists and physicians around the world,” Elysium Health CEO Eric Marcotulli told us. “The loss of brain volume that we experience begins in adulthood, accelerates as we get older, and has a significant impact on our cognitive abilities. The partnership between Elysium and the University of Oxford to develop Matter came very naturally – with Elysium’s mission to create novel products that address fundamental processes of aging and Oxford’s groundbreaking clinical trial results.”

The company claims that the powdered omega-3 free fatty acid formulation is 3-5 times more bioavailable than typical omega-3 fish oil products, and also eliminates the “fishy burps” that consumers complain about with standard fish oils. Elysium recommends two tablets of Matter daily, which can be taken with or without food.

Matter will begin shipping to customers after an initial pre-sale period, during which the Elysium community and customers of select partner brands will be provided early access. The product is expected to be generally available to the public by mid-July. Matter’s pricing is identical to that of Elysium’s first product, the NAD+ supplement Basis. A single jar retails for $60 and prepaid subscriptions start at $40 per bottle.

“The combination of the B vitamins – at the precise doses and ratios that were shown to slow brain atrophy – with a superior omega-3 to enhance their efficacy makes Matter a momentous advancement in consumer health that is truly novel.”

Matter’s formulation is the result of the findings of the VITACOG study conducted at the University of Oxford, which demonstrated that supplementation with a specific B-vitamin complex together with a good omega-3 fatty acid status slows grey matter atrophy in regions of the brain that are important for learning and memory.

“The combination of the B vitamins – at the precise doses and ratios that were shown to slow brain atrophy – with a superior omega-3 to enhance their efficacy makes Matter a momentous advancement in consumer health that is truly novel,” added Marcotulli. “Regardless of health status, our brains all atrophy as part of the aging process – Matter is the first cognitive health product backed by research from the University of Oxford to address this pervasive need and some of the deficits that underlie it.”

Elysium Health’s partnership with the University of Oxford includes the exclusive license to use the B-vitamin complex for dietary supplement and medical food applications to support long-term brain health and normal cognitive function.

High plasma concentrations of the amino acid homocysteine have been shown to correlate with the rate of brain shrinkage in healthy elderly individuals and are associated with a number of age-related conditions. Studies have shown that a good B-vitamin status is important in maintaining normal homocysteine levels.

“We began the VITACOG trial to see if we could slow brain atrophy by lowering homocysteine with B vitamin treatment. The results were more strikingly positive than we could have dreamt.”

Elysium also announced that University of Oxford professor emeritus of pharmacology A David Smith, PhD, an inventor on the patent and patent applications, has joined Elysium Health’s renowned scientific advisory board.

“I came into the field of dementia research driven both by my neuroscience research and by my mother’s battle with Alzheimer’s disease,” said Professor Smith. “In 1988, I co-founded the Oxford Project to Investigate Memory and Ageing (OPTIMA) with the aim of bettering our understanding of the disease. We recruited a large number of patients and volunteers and started annual brain imaging studies, looking for particular markers of brain aging. We soon found that one driver of atrophy in the temporal lobe is raised blood levels of homocysteine. Theorising that nutritional factors were an important part in the prevention of brain atrophy, we began the VITACOG trial to see if we could slow brain atrophy by lowering homocysteine with B vitamin treatment. The results were more strikingly positive than we could have dreamt.”

“As a researcher, Dr Smith has dedicated his career to understanding and preventing the age-related decline in cognitive function, and we’re honored to have him join our Scientific Advisory Board to help us further explore Matter’s ability to support long-term brain health,” said Marcotulli.