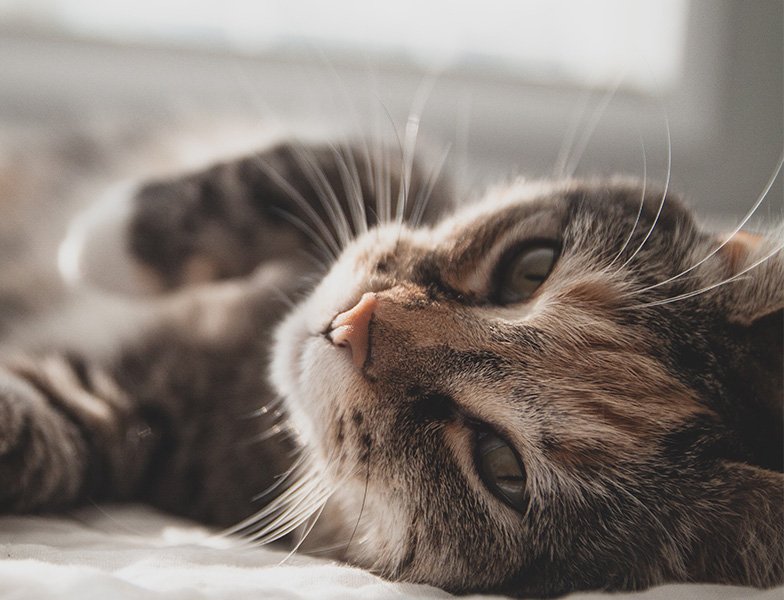 As purr-plexing as it may seem, cats may provide key answers in the study of dementia and Alzheimer’s disease.

As we get older, our brain isn’t as sharp as it once was – we forget things and it takes us longer to learn new concepts. Debilitating neurodegenerative diseases, like dementia and Alzheimer’s disease (AD), that develop with age further impair cognition.

Major hallmarks of Alzheimer’s, believed to be crucial in the development of the condition, include abnormal accumulation of b-amyloid (Ab) and neurofibrillary tangles (NFT), made up of hyperphosphorylated tau protein.

Ab is produced from cleavage of the precursor protein APP, which can lead to various lengths of Ab. Ab40 and Ab42 are the most common in patients with AD, the later forming characteristic senile plaques.

Tau protein is a microtubules-associated protein found in the cytoplasm which provides microtubule stability. When this protein is abnormally phosphorylated it clusters to form paired helical filaments, which develop into neurofibrillary tangles (NFTs).

Even though AD is a disease extensively researched and better understood from a biological point of view than most, current treatments work to treat the symptoms rather than the underlying cause. One research barrier is the lack of in vivo testing models – the currently accepted animal models do not develop the same biological characteristics nor cognitive impairments that can be quantified.

Perhaps surprisingly, cats are animals that have myriad similarities with human Alzheimer’s pathology. Cats show accumulation of both Ab40 and Ab42, yet the pattern of the deposits correlates more with elderly patients without any dementia symptoms [2,3].

Furthermore, cats produce similar isoforms of tau as humans – yet the literature disagrees on whether tau in cats can aggregate. Some report no evidence of NFT, whilst some report pre-tangles, which are believed to be early stages of NFTs [4,5].

Like humans, our beloved feline pets can develop age-related cognitive decline and eventually dementia, which is known as cognitive dysfunction syndrome (CDS). A collaboration between the University of Edinburgh and the University of California aimed to further knowledge in the translational research field by monitoring Ab and tau pathology in cats of different ages, with and without CDS.

As an animal lover, I feel obliged to point out the cats used in the study were euthanised due to A) old age where treatment was believed to have no effect, or B) where there was severe aggression that prevented the cat from being re-homed.

Back to the main topic of the article and the results of the study…
Ab deposits in younger cats were found within the cytoplasm, but in elderly cats the deposits were extracellular. These were found predominantly in the cortex in a diffuse pattern, as observed in human AD patients [6].

In humans, intracytoplasmic Ab is believed to act as an antioxidant [7], yet, with age, accumulation of the protein leads to cellular toxicity; once the affected neuron dies, the Ab is released and then accumulates extracellularly [8]. Furthermore, only one senior 16-year-old cat showed Ab plaque formations which are characteristic in AD.

There is no clear consensus in the literature about whether P-tau acts as a neuro-trigger or -protector. Regardless, there is a plethora of evidence tying in NFTs and the development in AD neurodegeneration. Specifically, tau post-translational modifications at specific residues could play a vital role [9,10].

This study presents purr-suasive evidence showing that elderly cats develop both Ab and tau pathologies in a manner that in very similar to human early-stage dementia and AD development [11].

A larger study monitoring and understanding the pathways of these pathologies could be the key for development of preventative therapeutics for dementia and AD patients. Treatment in this field will improve human and cat healthspan as we live longer with comfort, dignity and independence for a longer period of time. We might not get nine lives, but perhaps we can extend and improve the one we have.