News > 3D Bio-printingAll the way from regenerative research to commercialisation

All the way from regenerative research to commercialisation 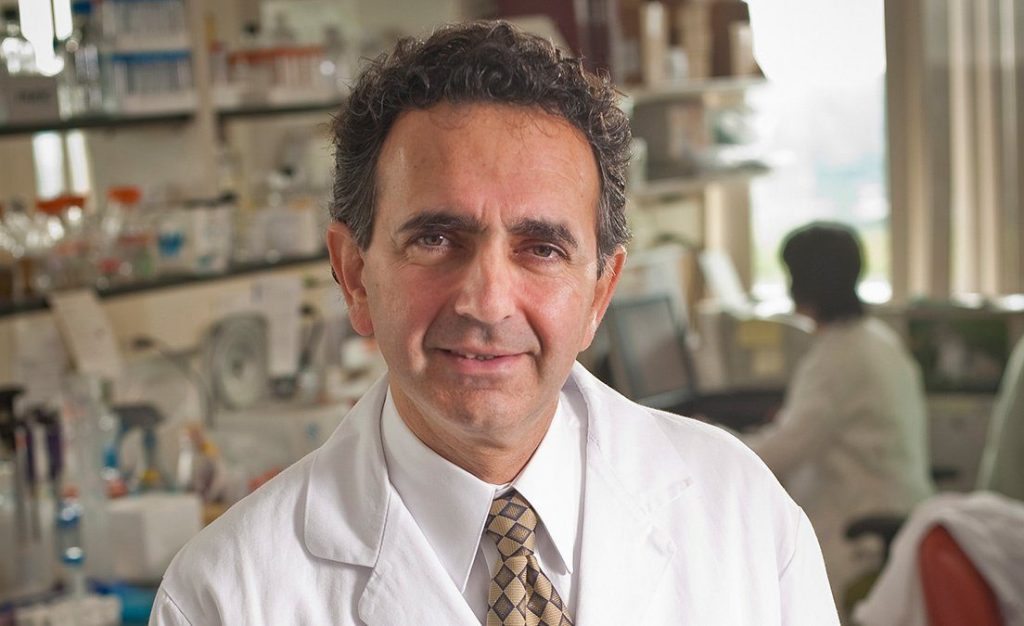 We speak to the director of the Wake Forest Institute of Regenerative Medicine – a research organisation with a clear focus on commercialisation.

Just on the edge of downtown Winston-Salem lies the Wake Forest Institute of Regenerative Medicine. For the last 16 years, the doctors and researchers here have been working on all manner of tissue engineering and regenerative engineering projects, with the common goal of creating clinical therapies that can cure, rather than treat disease.

Longevity.Technology: Tissue and organ regeneration makes up a significant part of the wider Longevity, and organisations like the Wake Forest institute are vital to ensuring the work conducted by scientists actually has the potential to reach the clinic. We caught up with the institute’s Chair and director, Dr Anthony Atala to find out where things are headed.

Atala is recognised as a leader for his contributions to the fields of cell, tissue and organ regeneration, and today oversees a team of more than 400 researchers at the institute that is developing cell therapies and engineering replacement tissues and organs. But the work behind the institute has been going on much longer and stems back to his time at Harvard Medical School and the Boston’s Children’s Hospital.

“We started this work in 1990 in Boston, and we moved our team here to North Carolina, to start the institute in 2014,” says Atala. “So it’s been about 30 years of work in this area.”
The institute covers a wide range of areas of regenerative medicine, after initially focusing on replacement organs.

“It’s a basic fact that, with our increasingly aging population, we are seeing a lot more patients presenting with organ failure,” says Atala. “Now the numbers of patients on the transplant waitlist are extremely high – higher than they have ever been before, so having organs for replacement is something that would be very helpful.”

“Engineering tissues for patients is how we got started 30 years ago, and we have successfully implanted different organs and tissues over the last decade or so. And that includes re-boosting organs in terms of their functionality, when they start to decline.”

Stem cell therapy is also a key area of focus at Wake Forest, as well as a specific focus on fibrosis.

“As we age, we all naturally have increased fibrosis in our bodies, and that is really what is causing the decline of tissue function,” says Atala.

“And therefore, a major area that we are working on is how to reverse the fibrosis to start with, so you don’t end up with kidney failure, or heart failure, or liver failure.”

Another primary research area is in gene editing, where the institute works with tools like CRISPR and on other approaches to manipulating the human genome. 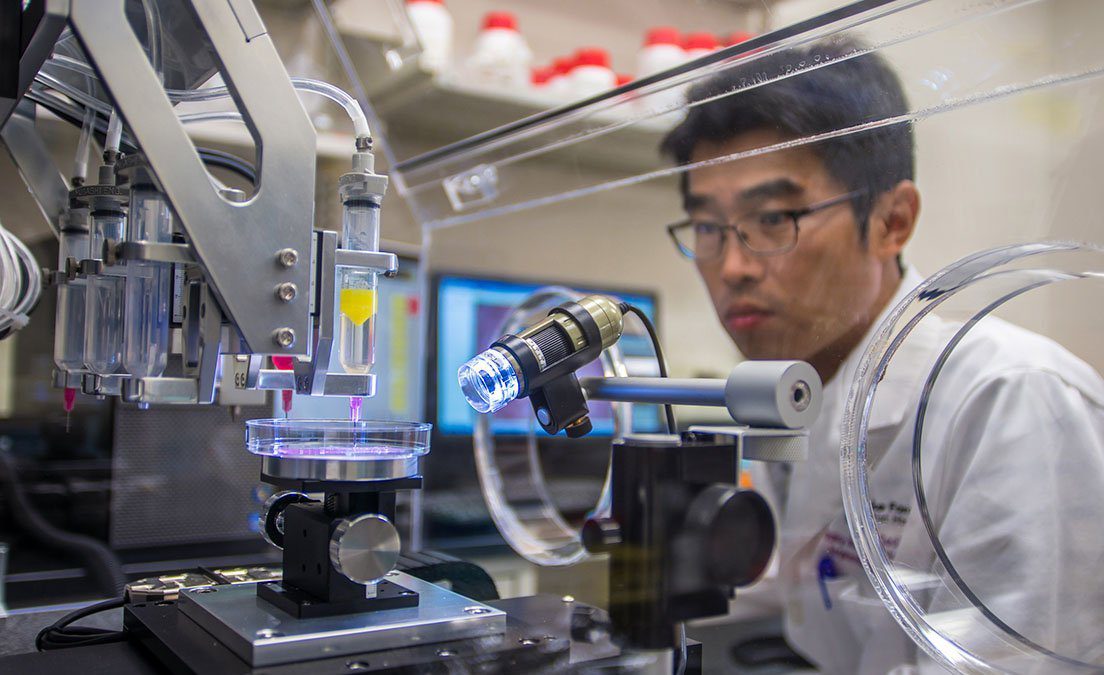 “We have created a few novel methods where we can really increase the efficiency of the gene editing, so that we can treat patients better using those techniques,” says Atala.
In more recent years, Wake Forest has gained recognition for its work in 3D bioprinting and organ-on-a-chip technology, for which it has received more than $50 million in research grant funding.

“We call it the body-on-a-chip, where we are able to create miniature human organs, like miniature livers, hearts, lungs, gut, brains, and we then are able to use these to screen drugs for discovery, toxicity and efficiency, and also to use them for personalised medicine,” says Atala. “In personalised medicine, for example, a patient presents with a tumour, we create a tumour-on-a-chip, and we’re then able to look at the chemotherapy agents that would be most effective for that specific patient’s tumour and proceed with that treatment in a personalised manner.”

“People think that bioprinting is this magic tool but, in reality, the printer is just an extension of what you need to do biologically.”

Despite the recent growth in interest in bioprinting, Atala feels the challenges facing the technology have been underestimated to an extent.

“People think that bioprinting is this magic tool but, in reality, the printer is just an extension of what you need to do biologically,” he says. “So if you’re going to create tissue, you still have to know how to be able to do that from scratch. You have to know about the cells, the cell biology, physiology, molecular biology, biochemistry – it’s a complex process.”

Having already started out creating and implanting structures and tissues manually, the institute started work to develop a bioprinter some 16 years ago.

“It really became obvious that we needed a method to scale up the technology, with something that would give us reproducibility and scalability and to reduce the cost, and something that would automate the process,” says Atala. “And that’s really how we got started in terms of printing. But at the end of the day, even though we spent all that time developing the printer, it is just a tool that allows you to do what you need to do biologically to create the tissue itself, but you still need to do all the other background work.”

With all of these different programs running concurrently and all with a focus on reaching the clinic, the institute is set up to take potential therapies much further down the commercialisation path than other research institutions. The technology has to be shown to work time and time again, in various hands, and that it can be scaled up, that it can be persistent in terms of its effect, that it is reproducible time and time again, and that it has certain release parameters.

“The science that goes into developing a translational product has a much higher bar than if you’re just doing this for research only,” says Atala. “So, once the research is done, and we believe that it’s ready to go into patients, we have a process development unit that actually translates the research components into manufacturable components that can be reliably manufactured.”

“The institute is designed so that we can do everything from basic research, to the proof of principle, to preclinical, all the way to process development, manufacturing, and Phase 1 and 2 clinical trials, so we can take it all the way to the patient.”

Wake Forest has its own regulatory team, quality assurance and quality control team, and its own FDA-compliant GMP manufacturing facility, where it manufactures products that go into patients.

“So we can proceed ourselves to into clinical trials through our facility,” says Atala. “The institute is designed so that we can do everything from basic research, to the proof of principle, to preclinical, all the way to process development, manufacturing, and Phase 1 and 2 clinical trials, so we can take it all the way to the patient.”

For commercialisation purposes, the institute also has what Atala calls a “generator”, essentially an incubator to bring any of the technologies developed here to market.

“We can commercialise technologies at any stage of development depending on how much it takes to take it to the next level,” he says. “So we can we can start commercialising technologies, but we don’t like to do so unless they’re advanced enough, so we know that they’re closer to the endgame.”

The institute can move technologies to the generator at an advanced preclinical level, at the process development stage, after manufacturing or after clinical trials. One example of a successful commercial venture that has come out of Wake Forest, is Twin City Bio, which spun out of the institute around eight years ago and is now an established contract manufacturing organisation.

“It depends on the technology and what type of resources it needs, whether we incubate it internally, or whether we commercialise it or spin it out,” says Atala. “The challenge is that if you try to commercialise technology too early, and all the kinks haven’t been worked out yet, then the chance for failure is high. But if we’re able to incubate technologies internally, and try to take care of all the challenges, then we have a higher chance of success, and the mission of the institute is to improve patients’ lives.”