Raising the stakes – we overview last year’s longevity investment funding and analyse just where the money’s going and how much.

2021 was an exciting year in longevity, and we spent part of it on the continued development of our commercial and scientific datasets. Longevity.Technology currently has a database of over 250 longevity companies – and that list is growing all the time! As part of our analysis of the state of longevity in 2021, we reviewed any company within the current dataset that had a investment funding raise during the first 11 months of year – this totalled 45 companies.
We split the longevity investment companies as follows:

We discovered that during 2021, the largest number of longevity companies that raised investment funds were in the sector focused on treating age-related diseases; in fact, more than twice as many companies raised funds in this category compared with the other three categories put together.

Interestingly, longevity investment funding across each category is a tale of two halves; almost $1 billion was raised by companies in each of the Treatment and Rejuvenation categories, whereas companies focused on Diagnostics raised just under half a billion dollars, and those focused on Prevention raised only $334m between them in the period considered.

Of course, Rejuvenation was dominated by a single large $500m raise by Calico, which is committed to the development of rejuvenation therapies, but it is still interesting that there is a longevity investment focus on repairing age-related damage, rather than preventing it from happening in the first place. A cynic might draw the conclusion that an effective, preventative one-stop-shop for aging, while perhaps better for mankind, is not as good a money-spinner as curing lots of people with lots of different conditions. Or perhaps the field researching damage prevention needs an influx of good ideas? 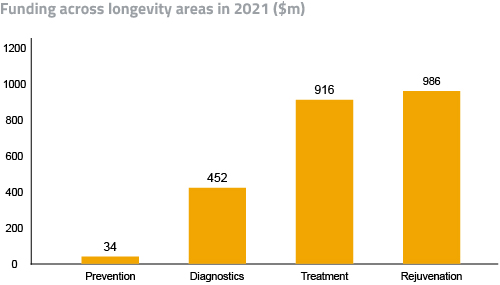 Calico’s $500m exceptional raising also contributes to rejuvenation companies having the highest average capital raise per company of $123m. Diagnostic companies raised $65m on average, but this category also includes a fundraising of >$255m by Insilico, a company that continues to go from strength-to-strength. On average, treatment-focused companies raised $40m and prevention companies only $8m. The range in size of fundraising in each category is shown below.

The percentage split of funds raised in each category by longevity investment type is illustrated below. 29% of capital raises for diagnostics companies were series C, while over 50% of rejuvenation companies were raising at Series B and above, consistent with the larger fund-raising amounts realised in these categories. 50% of prevention companies raised capital at seed phases, again consistent with the much smaller total funds raised, and the average fundraising amount per company in this category.

It’s clear that the longevity market is on the up and set for explosive growth; the business opportunity in longevity is really just getting started, but already we are seeing a focus on treatment and rejuvenation rather than diagnosis and prevention. Of course, you can’t treat, rejuvenate or measure either without diagnostics, so we would expect to see this category continue to increase its share. Curing an existing condition is always going to garner money and attention at the expense of preventing as-yet-undeveloped diseases, but once those strategies start paying off, perhaps the focus will shift to prevention and the research done in other areas will accelerate progress in discovering how to stop aging before it starts.

Read more about the state of longevity in our FREE Annual Report 2021 HERE.