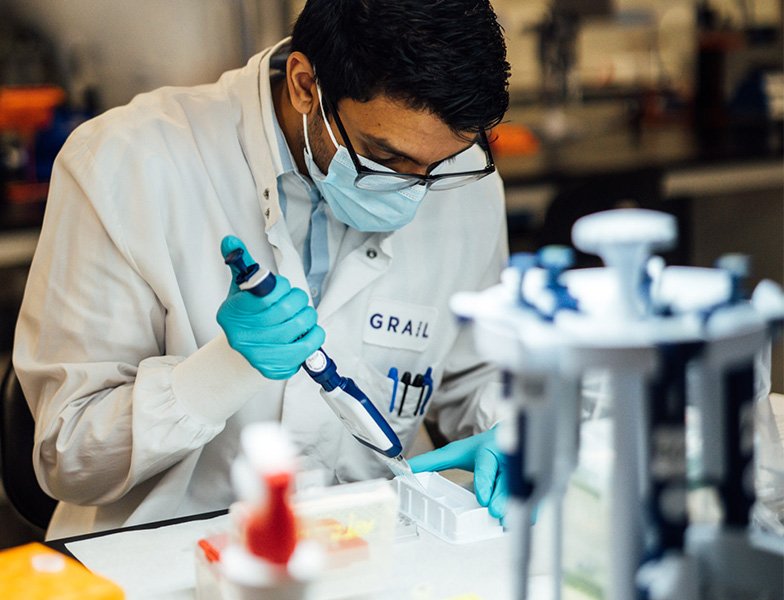 Blood test that can determine a cancer signal origin with high accuracy is now available on prescription in the US and could lead to regular screenings for other diseases and age-related conditions.

GRAIL, a healthcare company headquartered in Menlo Park, California, is an organisation tasked with the assignment of detecting cancer early, when it is still curable. Their primary goal is to save lives, and to prevent cancer from taking lives, but could its diagnostic platform also bring a slew of longevity benefits?

Longevity.Technology: GRAIL is building on its earlier commercial partnership programme with the NHS which aims to confirm Galleri’s clinical and economic performance in the UK healthcare system as a precursor to its routine use by the NHS. Now available on prescription in the US, and with a study on the clinical outcomes of 35,000 individuals announced, a simple blood draw could provide diagnostic information capable of preventing disease through early detection and intervention.

GRAIL has presented its first results for PATHFINDER, an interventional study evaluating the multi-cancer early detection test, (MCED,) which is also called Galleri™. The study was originally designed with the goal of achieving diagnostic resolution by way of following clinical pathways. This study specifically analysed those aged 50 and older because of their increased risk of cancer. None of the 6,629 subjects had suspicion of active cancer.

Preliminary data from Galleri suggests detection of 29 different individual cancers across 13 types. Those types being the breast, colon or rectum, head and neck, liver and bile duct, lung, lymphoid leukaemia, lymphoma, ovary, pancreas, plasma cell neoplasm, prostate, small intestine and Waldenstrom macroglobulinemia. In the US, a clinical validation study demonstrated that an earlier version of Galleri detected over 50 types of cancer with a low false positive rate of less than 1% through a single blood draw.

In order to detect the cancers, the company uses the considerable strength of next-generation sequencing, population scale clinical studies, computer and data science. When a cancer is detected, Galleri has the capability of localising the signal with high accuracy from a single blood draw.

New data published in Clinical Cancer Research, also demonstrate the ability of GRAIL’s technology to preferentially detect cancers that are more aggressive than expected based on age and the cancer stage and type. As several cancers are age-related, the detection could possibly be used to correlate with biological aging, understanding in greater depth the risks of aging and how to detect them.

With such a low false positive rate, the future certainly looks bright for Galleri; this of course leads us to consider the possibilities of this technology reaching other diseases both diagnostically and preventively. The likelihood of comorbidities means that these blood draws will be collecting a whole range of biomarkers, not just for cancer. As the data is analysed, biomarker trends and traits could lead to the platform’s adaption into a test for the diseases of aging. Early detection means early intervention, and this can often make a significant different to patient outcome.

“The interim results of PATHFINDER demonstrate that a routine blood test is capable of detecting many different cancers even before symptoms arise, an approach that has significant potential advantages,” says Dr Tomasz M Beer, deputy director at the OHSU Knight Cancer Institute and presenting author.

Beer continues, “Most importantly, it can detect cancers that have no recommended screening tests today, and more than two-thirds of cancers go unscreened for this reason. These results are a pivotal step toward extending early detection to many more types of cancer [1].

Galleri is available in the US by prescription only. The test is currently aimed at those who have an elevated risk of cancer and as a complement to existing single cancer screening tests.

GRAIL has announced a real-world evidence study it plans to establish called REFLECTION. This study will be to adjudicate clinical outcomes and experiences of 35,000 US subjects being prescribed the Galleri test through a healthcare provider. In addition, Galleri will be offered to eligible patients in the UK later this year as a partnership with the UK National Health Service.

The data from these studies will be of significant diagnostic value, both in understanding traits of aging, and pushing towards early detection. The drive to end cancer has the potential to pioneer the revolution of modern medical diagnosis technology, as it can detect problems before they arise. Getting regular check-ups could mean preventing countless other diseases from taking hold in the system, a preventative ethos that could slow aging across the board.