News > InnovationEarly and accelerated aging caused by cigarettes and alcohol

Early and accelerated aging caused by cigarettes and alcohol 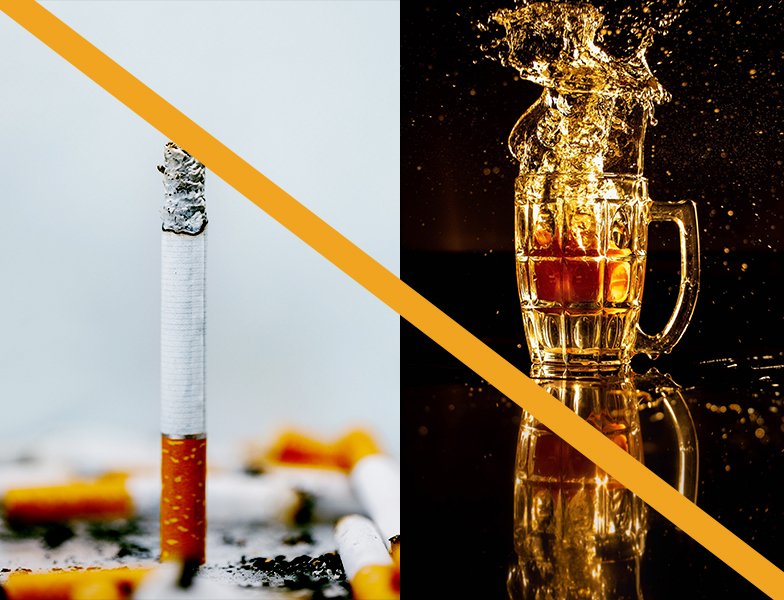 Epigenetic aging can start earlier than you think – and some of the usual suspects are in the frame.

Aging and its associated health conditions are often considered to be an affliction that comes to us in our twilight years; the received wisdom is that young adults do not tend to be too concerned about the damages of aging as they are a worry for the future. However, recent research has shown that accelerated aging and damages due to aging can affect young adults who are heavy drinkers and smokers.

Longevity.Technology: Heavy consumption of alcohol and smoking of cigarettes can lead to serious health conditions in individuals of all age groups. Excessive smoking and drinking in the long term can cause permanent damage to the heart, lungs, kidneys and lead to cancer. Excessive alcohol consumption of pregnant women can cause permanent and irreversible damage to their babies, but another prominent impact of smoking and drinking in early childhood and one that doesn’t make to the dire warning labels is epigenetic aging. As Oasis might have put it: “Looking for accelerated epigenetic action? All you need are cigarettes and alcohol.” Well, something along those lines.

Children and young adults are not always known for making the wisest or most risk averse, but smoking and drinking could be two choices with long-term effects. Cigarettes are known to contain 400 toxic chemical compounds, a few of them include carbon monoxide, DDT, arsenic and tar. While consumption of a limited quantity of alcohol, such as red wine, can confer health benefits, excessive consumption most often leads to serious medical conditions.

Both smoking and alcohol can cause severe heart diseases by causing stiffening of the arteries. Also, since smoking is can be common in individuals who consume alcohol, both drinkers and smokers tend to follow similar lifestyle patterns. This makes it difficult to determine whether the incidence of heart diseases is a result of independent effects of smoking or drinking or due to a combined effect of both. A study led by the Barcelona Institute for Global Health indicated that exposure to tobacco smoking during pregnancy or early childhood can lead to an acceleration in epigenetic aging in those children. This in turn can cause cardiovascular or neurodegenerative diseases in the future [1].

Epigenetic aging is brought about by epigenetic modifications, mostly DNA methylations that serve as an important biomarker of aging or “aging clocks”. Modulation of these aging clocks is brought about by several environmental factors such as unhealthy diet, alcohol, smoking, stress, &c. Nowadays scientists are more invested in epigenetic age that are based on aging clocks as they are more accurate in determining the lifestyle and environmental factors of an individual than their chronological age. Another study presented at the European Society of Cardiology involved young adults aged between 17 and 24 years whose arterial stiffness was assessed to determine the effects of heavy smoking and drinking. The study was led by Hugo Walford who is a medical student at University College London, UK.

The use of alcohol was classified into three types: never, medium (4 drinks or fewer a day) and heavy (5 drinks or more a day). Smoking was also categorised into four types: never, past, medium (fewer than 10 cigarettes a day) and heavy (10 or more cigarettes a day). Other important factors such as sex, age, socioeconomic status, blood pressure, blood glucose, C-reactive protein, and low-density lipoprotein (LDL) cholesterol were also considered for the study.

“The results suggest that arterial damage occurs in young drinkers and young women who smoke heavily. Never smokers and ex-smokers had similar alterations in arterial stiffness, indicating that quitting can restore vascular health at this young age,” said Walford.

“Binge drinking is often a normal experience for students, and a falling smoking prevalence in the UK is challenged by a sharp rise in e-cigarette use. Young people may believe that drinking and smoking do not cause long-term damage. However, these results indicate that these behaviours could put young people on a life-course trajectory starting with early arterial stiffening, which may eventually lead to heart disease and stroke,” he concluded [2].

To enable a long and healthy life, it’s never too early to focus on longevity-enhancing behaviours; youthful indulgences may wreak epigenetic havoc, the consequences of which are felt long after the fleeting enjoyment has been forgotten.