Following yesterday’s introduction to Gerostate Alpha, today we continue our interview with two of the company’s founders, Simon Melov and Mark Lucanic.

At the platform’s “front end”, the high throughput screen is predominantly based on lifespan extension data from a variety of strains and species of Caenorhabditis nematodes – simple, short-lived organisms, which allow manipulations of lifespan to be studied more easily.

“At the back end, we phenotype the successful interventions that target different aspects of aging, in mice,” says Melov. “And we’re looking at multiple indications simultaneously, whether muscle dysfunction, lung function, bone function, cardiac function, the CNS to some extent. All of these things are screened for simultaneously. And I would argue this is something we can do better than anyone else.” 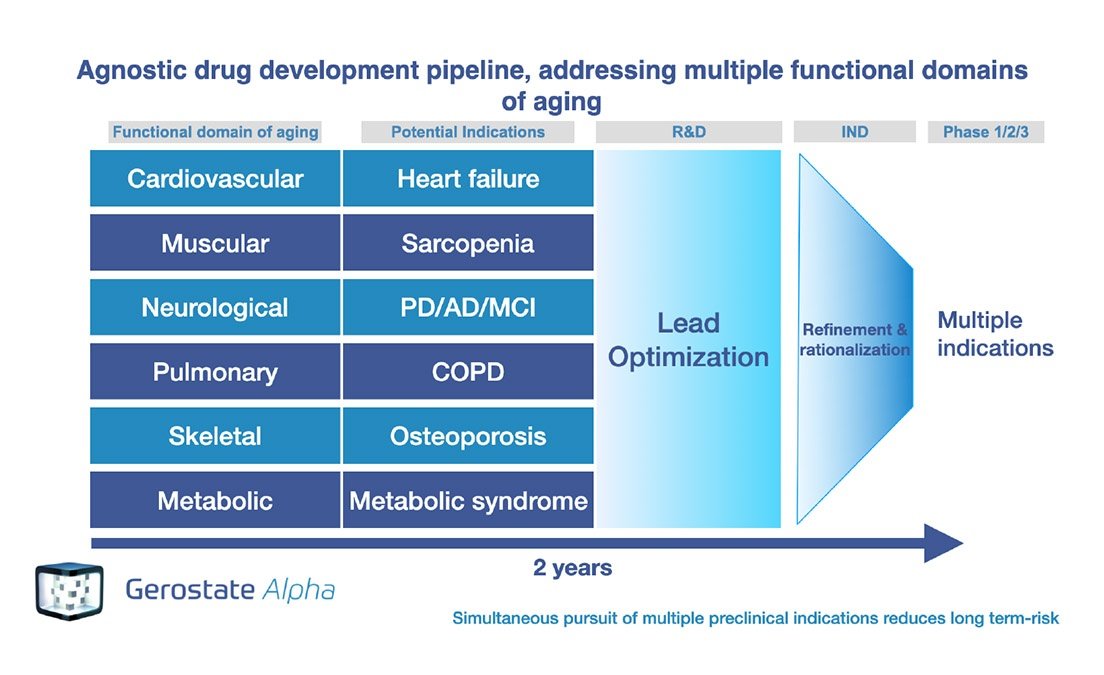 Melov’s confidence is largely because of the infrastructure that has been built up at the Buck Institute over many decades, and which would cost tens of millions of dollars if a start-up were to attempt to replicate it.

“Our initial strategy was to screen small molecule libraries, so we did that on around 60,000 compounds, and we identified over 30 hits that have been validated,” says Lucanic, pointing out that some of the best hits are resulting in lifespan extensions in Caenorhabditis of around 40%, which is large for a pharmacological intervention.

“We’re now prepping those and derivatives of those into lead candidates to move into our preclinical mouse models,” he adds. “But in parallel to that, we screened some libraries of off-patent compounds, and we’ve moved those through into preclinical mouse models already. We’ve had some really interesting hits and we’re now doing our follow up experiments on the pathways involved in those and the efficacy of those compounds, in those specific tissues.”

“Preliminarily, it looks as though it’s not only mitigating bone loss, but also looks like it’s leading to bone growth and restoring them to more youthful states.”

Lucanic reveals that one of those indications is an off-patent compound that appears to impact bone loss in aging mice, and on which the company plans to publish a paper. “Preliminarily, it looks as though it’s not only mitigating bone loss, but also looks like it’s leading to bone growth and restoring them to more youthful states,” he says.

But what really has the Gerostate Alpha team excited is the opportunity to look at the effect of their novel compounds in mouse models, with in vivo studies expected to start in early spring.

“These compounds are exciting, in that they don’t look like known drugs that have been probed for aging effects,” says Lucanic. “They’re structurally diverse… and we can’t easily classify them – we don’t yet know the pathway of action for many of them.”

“Our whole approach is to screen for phenotypes – we don’t have a particular pathway that we’re focusing on,” adds Melov. “Our phenotype is lifespan. We’re looking for the magnitude of the increase in lifespan, and then we look to see what phenotypes associated with that lifespan extension are reduced in aging mice.”

Gerostate Alpha is currently seeking additional seed funding of $2 million to take the company into 2022, at which point it expects to raise a series A round.

“We were always envisaging a two year timeline to getting into Phase 1 trials,” says Melov. “That’s dependent on these molecules getting through the toxicity assays, and getting through the early mouse studies, over the course of the next year or so. Because there’s such a need for molecules in many of the indications that we’re looking at that, we anticipate we’ll be able to move quite speedily into Phase 1.”

“We want to be ahead of the game, we don’t want to adhere to old practices of targeting a single indication … we’re trying to address everything simultaneously.”

Focusing on aging could present some challenges from a commercial perspective, because investors want to see well-characterised targets for new drugs, but Gerostate Alpha is committed to its mission.

“Investors definitely want to see that you’re on track to targeting some indication, and that’s hard if you’re saying that the best pathways have yet to be discovered,” says Melov. “But make no bones about it, we’re a shoot for the stars enterprise. We want to be ahead of the game. We don’t want to adhere to old practices of targeting a single indication, whether it’s inflammation or telomeres or whatever, we’re trying to address everything simultaneously.”

“In terms of a discovery platform, we’re not just talking about tracking biomarkers of aging… we’re talking about actually slowing functional indices of aging and demonstrating that in the most robust, scientifically accurate way we can,” he adds. “That’s what we’re intent on doing and demonstrating to investors who are savvy enough to appreciate that kind of rigour, as opposed to alternative approaches.”

Images courtesy of Gerostate Alpha and The Buck Institute