Has bioprinting hit a jam? 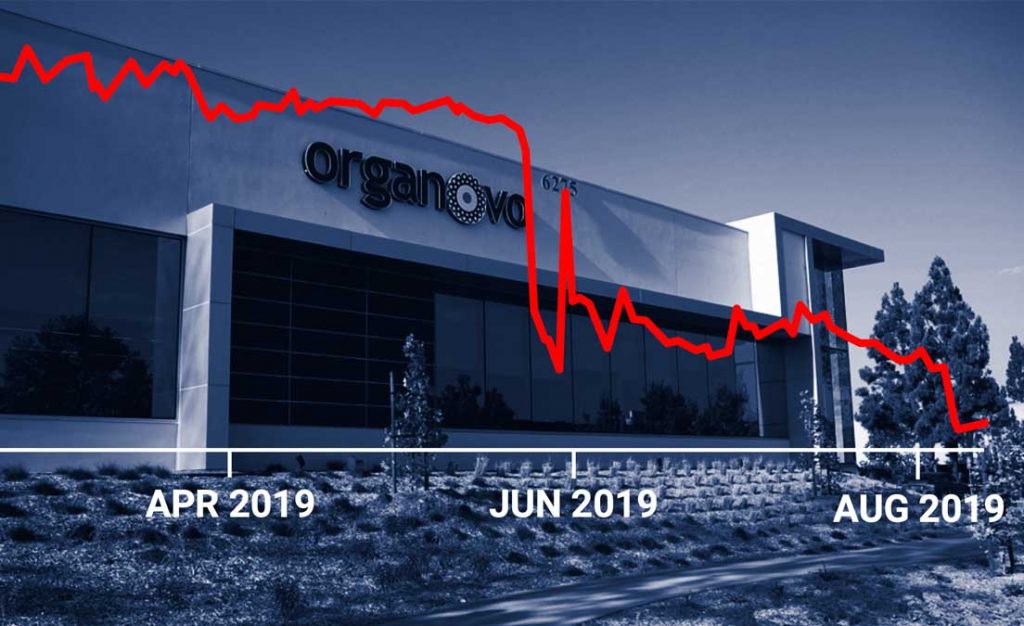 A first-mover in lab-printed tissues has halted its lead-program and cut back on staff. What does this mean for the bioprinting market?

Last Wednesday, the 3D-bioprinting company Organovo Holdings announced in a surprise press release that it was hitting the hard reset button. Its lead program, the development of a liver tissue “patch” for those in need of organ transplants, and the culmination of more than a decade’s worth of work, would have to be abandoned.

The liver patch, they concluded, had not demonstrated conclusive enough evidence of prolonged functionality or therapeutic benefit, nor was it possible to redevelop it without unacceptable cost and risk. The news caused a 36% fall in share price, where they currently trade at 27 cents apiece. The company followed this announcement with a regulatory filing on Thursday disclosing that it had dismissed 40 workers, 69% of its staff.

Longevity.Technology: Organovo’s inability to deliver its liver is, on the surface, not incredibly surprising. 3D-bioprinting is a risky investment space. The fact that the word “breakthrough” is applied (by outlets including ourselves) to so many of the recent advances in the industry – exciting as they are – is as sure a sign as any that it’s in its early stages. Just how early is a much more difficult question than it might first seem.

The TRL score for this Longevity.Technology domain is currently set at: “Early proof of concept demonstrated in the laboratory”

The TRL score for the technology addressed in this article is: “Late proof of concept demonstrated in real life conditions.”

Bioprinting of complete organs is a way off, and tissue “patches” to be transplanted onto defunct organs may not be possible just yet. But Organovo’s ditched strategy – growing tissue patches on commission for pharma drug testing while working towards making them transplantable – looked as good a route as any for those operating in this space.

So why then, did it fail? Our answer comes in two parts. On the technical side, Organovo was hemmed in by three of the classic problems faced by the bioprinting industry. Firstly, there is the difficulty in replicating the complex vasculature needed to grow larger tissues, a problem that, without any further development, would have limited the scale of their tissues to below one suitable for humans. Secondly, there is ensuring the immune system does not reject the liver patch once it is in place. A solution to this would rely upon the team finding a way to “trick” or “disarm” the body’s immune system, to quote CEO Taylor Crouch. Thirdly and finally, there is ensuring enough ‘resolution’ (detail in the structure) of the printed tissue while also being able to manufacture cells quickly enough.

It would be instructive to know how successful Organovo were in tackling these problems – each one on their own would have been a significant challenge to their growth. But it is the R&D cost these challenges placed upon the books that almost certainly led to trouble.

This is the second part of the answer: the resources they needed to dedicate to research significantly dwarfed revenue generated from their inbound commissions. In the year ending March 31st, they reported a net loss of $26.6m on revenues of $3m, for the year prior the loss was of $34.8m on revenues of $4.6m. R&D costs for those years sat at the respective sums of $14.8m and $18m, with the $3.2m reduction originating from cutbacks to the team’s size. Organovo say they saw reduced revenue in their most recent fiscal year from a decrease in contracts for liver testing services and the end of some collaborations, which could have been all it took to tip the balance – making their research unsustainable.

A superficial reading of the broader bioprinting sector would make it tempting to dismiss their failure as a one-off. The field is hotting up at the moment, with recent advances from Carnegie Mellon University following those by Prellis Biologics and Volumetric, the latter two are both spin-outs entering the commercial space with exciting new ways to reproduce more complex vasculature. But all of these are still a way off from finding solutions to the second and third technical problems, which come later down the production line. The closest we can see are scientists at the University of Pittsburgh Medical Center working on the second. They are partway into a small pilot study to trick the immune system, modifying regulatory cells to recognise transplanted tissue as the body’s own. But the commercial horizon on this, as for all cutting edge science, is hard to forecast.

Whether the first truly significant success in this area is just around the corner or much further away really depends upon how quickly these efforts combine, and how far each of the commercial stops along the way to full transplantable organ growth (i.e. printing simple organs for drug testing and printing patches or smaller ‘organoids’ for transplant) can themselves expand past current limitations. Depending, as it does, on the rolling development of the science beyond an unseen tipping point – this is a tough one to predict.

Not even Organovo, or some version of them, are entirely ruled out of the race. They’re currently working with Roth Capital Partners to explore their options, which include the potential for an acquisition, merger or sale of assets, amongst others. As one of the most experienced companies in this area, and one of those the furthest ahead with a large amount of accumulated research, this could make them an attractive opportunity for former competitors. Whatever their future may be, they have to be admired for pioneering a path ahead so much earlier than anyone else, and making even their setbacks instructive to the rest of us. They certainly have guts.