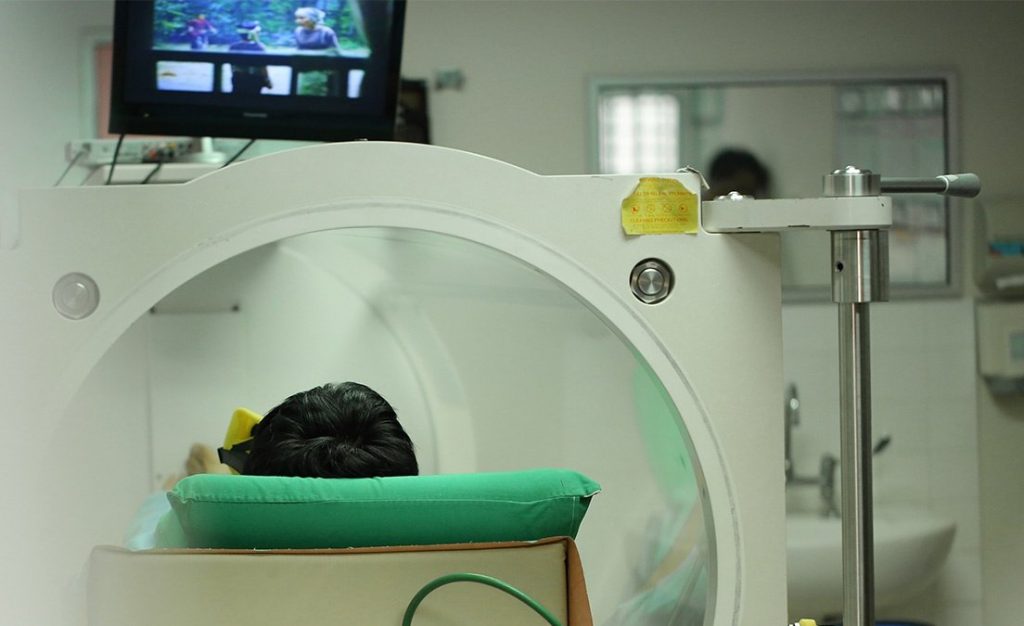 Hyperbaric oxygen therapy can significantly decrease aging characteristics – does it have a future as a commercial Longevity treatment?

Aging is made up of many complex changes that are simply inevitable – or are they? Scientists in Israel have been able to use oxygen to reverse two hallmarks of aging, telomere length and cellular senescence, resulting in physical changes at a cellular that were equivalent to how the participants’ cells were 25 years ago.

Many headlines around the world shouted: “First-Time Human Study Shows Reversal in Biology of Aging.” This met with a collective “hmm” from many of our readers, but it’s worth taking a deeper dive…

Longevity.Technology: Hyperbaric chambers are slowly becoming more commercially available (starting at c.$20k) and HBOT has shown a preventative effect on cognitive decline. Professor Uri Ashery from the Department of Neurobiology in Tel Aviv University tackles Alzheimer’s and Longevity from a HBOT approach. He is set to present the ground-breaking HBOT technology at the Neurotech2020 conference, to separate the hype from the chamber of secrets.

Telomeres are strands of unpaired DNA at the end of every chromosome which prevent DNA damage, for instance by preventing enzymatic degradation and fusion of distinct chromosomes.

With every normal cell division, telomeres shorten due to cellular replication imperfections. A 2016 coronary heart disease (CHD) study found that leukocyte telomere length was predictive of mortality rate in patients [1].

This hyperoxic environment, in theory, generates a similar effect in the body as physical exercise and intermittent fasting do.

Once the telomeres reach a critical length, the cell enters senescence where it stops dividing and growing without undergoing cell death. Senescent cells have been shown to accumulate around pathological areas [2], but senolytic drugs remove these cells and prevent the physical deterioration accompanying aging.

A study published in Nature Medicine looked at the effect of senescent cells in the aging of mice. They found that even a small number of transplanted senescent cells into young mice resulted in an array of pathologies. On top of that, removing senescent cells from aging mice increased their Longevity by 36% [4].

It is predicted that by 2023 the senescence market is to hit $644m [3]. Non-pharmacological routes have previously been hard to find – until now. Israeli Longevity researchers gave 35 healthy adults hyperbaric oxygen therapy (HBOT), meaning the individuals breathed in high levels of oxygen in an elevated pressure chamber.

Shai Efrati and his team aimed to exploit the hyperoxic-hypoxic paradox. The term describes the phenomenon where intermittent hyperoxic exposures induce similar physiological responses as hypoxia, where not enough oxygen gets into the bloodstream.

The end goal is to generate minute amounts of radical oxygen species (ROS) that will then generate a strong immune response and antioxidants. By generating a higher number of antioxidants to scavenge these deleterious ROS species synthesised naturally, DNA damage and telomere shortening can be prevented.

This hyperoxic environment, in theory, generates a similar effect in the body as physical exercise and intermittent fasting do.

A hypothesised mechanism for telomere shortening is through oxidative stress. Oxidative stress can be caused by a plethora of environmental factors encountered in modern life: stress, poor diet, pollution and emotional intensity, to name a few. Sound familiar?

What Shai Efrati found was that HBOT leads to telomere length reversal in some immune cells. Results varied in significance: B cells showed the most telomere elongation and cytotoxic T cells showed the highest decrease in senescent cells. This prospective trial opens many questions: could the hyperoxic stress catalyse apoptosis of senescent cells and thus elongate telomere length?

This study reversed two aging hallmarks, yet the authors themselves point out limitations. The study cohort was small with no control group used. Follow-up tests would be key in understanding long-term effects of HBOT and telomerase activity must be evaluated in order to understand just how telomeres are regenerated.

Would you go out and buy your Hyperbaric chamber? Well, with a starting-price of a reasonably-sized car possibly not a realistic choice for everyone just yet, but as part of a regular regime offered by your local Longevity clinic, probably yes.

The study monitored the lifestyle changes between individuals during the trial with 60 sessions of HBOT undertaken. Data shows that after the 30th session both telomere length and senescent cell amount peaked, thus a closer study of each session would show just when the optimal effect is obtained.

HBOT’s applications are undeniable and deserve a more focused and well-funded approach to tackle the physiology of aging for a healthier longer life.