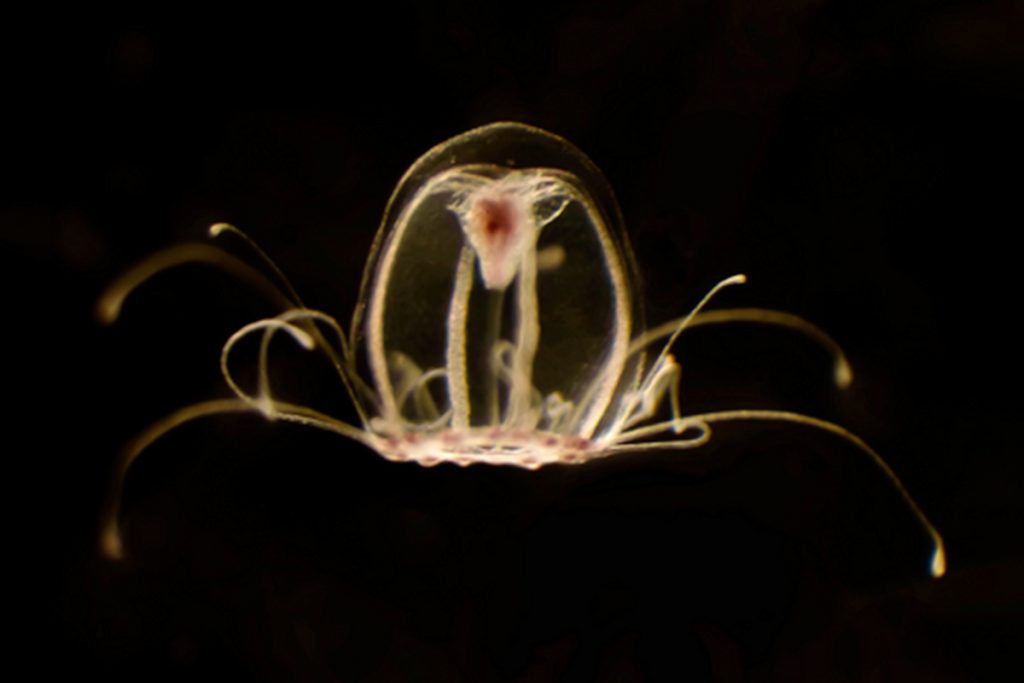 A team of researchers has deciphered a jellyfish genome in hopes of discovering the genetic key to its remarkable rejuvenating ability.

A team of researchers from the University of Oviedo led by Dr Carlos López-Otín has managed to decipher the genome of the so-called immortal jellyfish, Turritopsis dohrnii. The team has also defined a selection of genomic keys that contribute to the jellyfish’s exceptional longevity – which can extend to the point of avoiding death.

The results have been published in the American journal Proceedings of the National Academy of Sciences.

Longevity.Technology: For most organisms, the reproductive stage of life is followed by inexorable decline brought about by cellular and tissue aging and which culminates in death. Not so for T dohrnii, which can say: “Not today,” to death and rejuvenate instead.

While it may have a long life, T dohrnii is tiny, measuring only a few millimetres in length. But size isn’t everything, and this small sea creature has the amazing ability to reverse the direction of its life cycle – in fact, it the only known species of jellyfish that can repeatedly revert into the juvenile larval stage after sexual reproduction. This earlier asexual stage is called a polyp, and this jellyfish’s unusual capability of seemingly biological immortality makes it a key target for geroscience.

The research team compared the genome of Turritopsis dohrnii with its close genetic relative T rubra, a jellyfish which cannot rejuvenate after sexual reproduction. Using bioinformatics and comparative genomics tools, the researchers identified genes that are amplified or have different variants looking for “immortal characteristics”.

The genes identified by the researchers are associated with DNA replication and repair, telomere maintenance, renewal of the stem cell population, intercellular communication and reduction of the oxidative cellular environment. They all affect processes that in humans have been associated with longevity and healthy aging.

Variations in the T dohrnii genome appear to give it superior ability when it comes to replicating and repairing DNA. In addition, the jellyfish are also able to better maintain their telomeres, the shortening of which correlates with aging [1].

The research team examined changes in gene expression during the T dohrnii‘s rejuvenation process and found gene silencing signals mediated by the so-called “Polycomb” pathway, as well as increased expression of genes related to the cell pluripotency pathway. T dohrnii has twice as many copies of the pluripotency differentiation gene GLI3 is gene as T rubra, and the researchers found that all the copies are active at the time of reversion [1].

Both processes are necessary for specialised cells to differentiate and be able to become any type of cell, the process by which a new organism is formed. This could mean that these biochemical pathways serve as fundamental mediators of the cyclical rejuvenation of this intriguing jellyfish.

Maria Pascual-Torner, postdoctoral researcher at the Department of Biochemistry and Molecular Biology at the University of Oviedo is first author of the article together with Dido Carrero. She explained that: “Rather than having a single key to rejuvenation and immortality, the various mechanisms found in our work would act synergistically as a whole, thus orchestrating the process to ensure the successful rejuvenation of the immortal jellyfish [2].”

Carlos López-Otín, professor of Biochemistry and Molecular Biology at the Asturian university, added: “This work does not pursue the search for strategies to achieve the dreams of human immortality that some announce, but to understand the keys and the limits of the fascinating cellular plasticity that allows some organisms to be able to travel back in time. From this knowledge we hope to find better answers to the many diseases associated with aging that overwhelm us today [2].”