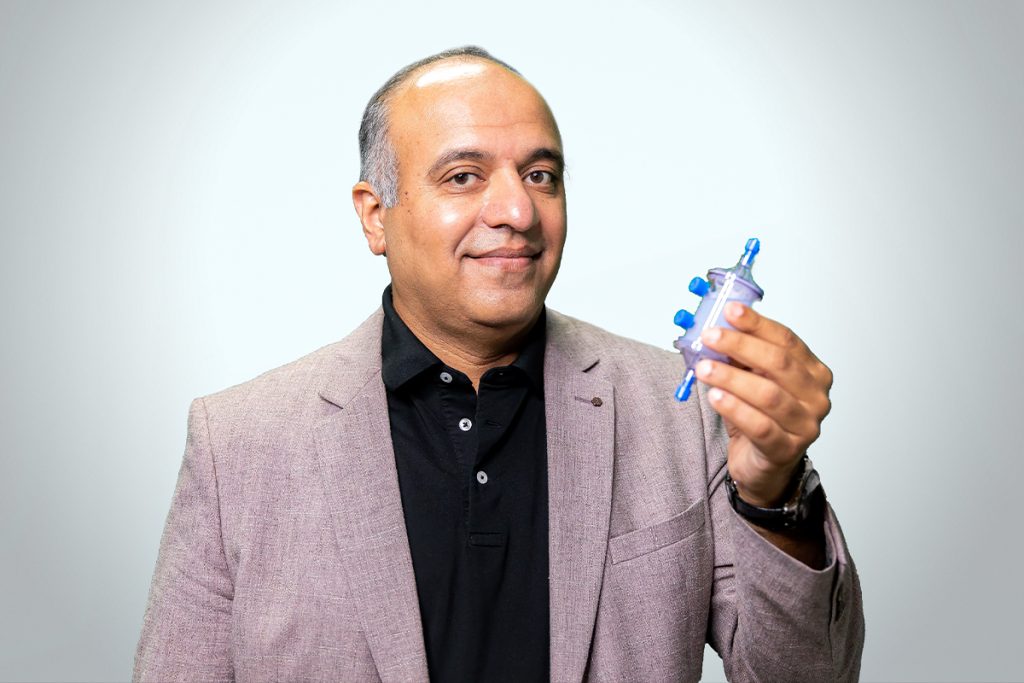 Immunicom founder on how blood filtering device for treating disease outside our body can be applied in age-related disease and longevity.

San Diego-based biotech Immunicom has developed an innovative therapeutic device that is intended to remove specific factors from blood that prevent our immune systems from fighting disease. Existing “therapeutic apheresis” treatments usually involve modification to cells harvested from patients or some form of plasma exchange. Immunicom’s technology uses a similar treatment procedure but says its approach of “capturing” targeted molecules is very different from other treatments.

Immunicom creates customised molecules that are designed to capture specific proteins or cytokines, but instead of turning those into drugs, it deploys them via its proprietary cartridges, which are essentially small liquid filters that can be fitted into any plasmapheresis machine. In a treatment similar to dialysis, the cartridges are used to treat a patient’s blood and plasma outside their body, reducing the levels of the target factors, with the goal of enabling the immune system to fight disease.

While Immunicom has focused its initial efforts on treatments for cancer, the company claims its technology can also potentially be applied to longevity and the treatment of a wide range of age-related diseases.

Longevity.Technology: One of the major challenges with the traditional drug-based approach to medicine is that therapeutic approaches often don’t work as well in practice as they do in the lab. They can become toxic, cause more complications and can even become more detrimental to the patient than the disease itself. With its “Immunopheresis therapy”, Immunicom is approaching the problem in a different way. We caught up with the company’s founder and CEO Amir Jafri to learn more.

The idea behind Immunicom, says Jafri, stemmed from his perceptions of key shortcomings in the modern healthcare system.

“When you look at most diseases or conditions that impact longevity, there aren’t many very good solutions, and what solutions there are, don’t give you a better quality of life, they just help you live longer with toxicity, side-effects and compromises,” he says. “We thought there had to be a better way.”

One of the problems with most diseases is the build-up of toxins in our bodies over years and years of life.

“Look at our food, look at our water – everything has been altered, modified with hormones, proteins, chemicals, whatever,” he says. “This has allowed for a healthier life in our 30s, 40s and 50s, but as we get older, we pay the price because these things come back, causing multiple health complications.”

The build-up in toxicities and genetic mutations in our bodies over time can lead to mounting problems as we age.

“For many diseases, there is an underlying basis, some soluble factor that is being secreted in your body,” says Jafri. “Yes, some people have a high genetic proclivity for certain diseases, but that’s a very small percentage of the population. Most people develop diseases or conditions that affect longevity through environmental factors, lifestyle, diet and other things.”

All this accumulation, says Jafri, has an impact on our immune system’s ability to fight disease.

“There are about 50 or so cytokines that regulate your immune system,” he says. “There are so many proteins and growth factors that are secreted by cells in your body, depending on what’s happening that affect how you react. There are proteins that are secreted more as you age, and that cause loss of muscle definition, for example.”

“And we know what many of these things are, and they aren’t inside cells. They are secreted into your circulatory system, then they go and affect your cells accordingly.”

But being able to identify the problem is less than half the battle, says Jafri.

“So why don’t we just make some drugs and pills to fix this thing, right?” he asks. “Well, yes, you could probably make antibodies for these factors. But as soon as you ingest an antibody or a drug or a chemical and into the body, you then have other side effects. Especially when you start dealing with these immune regulating soluble factors. Their pathways are extremely complex.”

“The immune system sees an antibody as a foreign body element and creates its own responses against it. And that’s how you get toxicity. And then eventually, you also start developing resistance and other side effects and things of that nature.”

This led to genesis of Immunicom. Jafri and his colleagues sought another way to decrease these soluble factors in our bodies, without drugs or chemicals entering our systems at any point.

“We decided that we must not put anything artificial into the body, to avoid setting off all those red flags off in the immune system,” he says. “Instead of doing that, what if we could just decrease the concentration of these factors that are elevated? So that all the immune system sees is the level of a protein going down, and nothing foreign is helping in that effort.”

The company first focused on the development of the cartridge system now being trialled at hospitals around the world – but Immunicom wanted to do more than create a new delivery system.

“We also design small molecules, very small peptides, that will bind and neutralise whatever the soluble target is,” says Jafri. “That could be a specific protein that’s affecting muscle definition. It could be something secreted by cancer cells that is suppressing the immune system and shielding the cancer cell. It could be something that is hyperinflated and causing an autoimmune condition or gastric condition. Or it could be soluble factors that are elevated as you get older and cause degradation of your organs.”

Instead of taking its peptides and turning them into a drug, Immunicom stabilises them in its external cartridge, which contains a proprietary matrix that allows the target factor to be removed from the plasma.

“Let’s say you want to capture a certain protein,” says Jafri. “We create a peptide that is intended to target that protein and put it in our cartridge. The plasma passes through the filter, and we only capture that protein – nothing else. Nothing else in the blood or plasma is altered, there are potentially no blood chemistry changes, no antibody reactions. As far as the body is concerned, the protein just started decreasing in concentration and going back to equilibrium.”

Building for the future and longevity

Immunicom’s cartridge system is designed to be able to target up to eight factors in a single cartridge, and can also be used in sequence, potentially allowing for highly customised treatments in future.

“Let’s say your doctor does some blood work and checks your biomarkers,” says Jafri. “If the data indicates you need help on muscle definition and organ health, they can link the cartridges up in serial for those factors. You can customise the treatment, and it can also be used in combination with any drug therapy.”

The product’s safety aspect is key to Immunicom’s success to date, having already secured a CE Mark in Europe, and Breakthrough Device Designation from the US FDA. The company’s first LW-02 cartridge has been granted initial European approval for advanced, refractory triple-negative breast cancer, and recently received grant funding to initiate its first US-based clinical trial at the Baylor College of Medicine in Houston, Texas.

“We’ve designed this to be very safe – it’s not intended to impede or compete with any drug reactions, because we’re not doing anything inside the body,” says Jafri. “We’re not taxing any organ or system in your body. We are physically removing the target in a non-chemical, non-toxic way.”

While Immunicom is likely to remain focused on cancer for the next two to three years, Jafri says the company is already moving forward on preclinical work on a new cartridge targeting a factor with “broad potential” in a range of potential indications, including inflammatory conditions, autoimmune disease and other cancer types.

“Up to now, we’ve been focusing on cancer patients,” says Jafri. “But our R&D product portfolio includes many other diseases and conditions that affect longevity and your quality of life.”