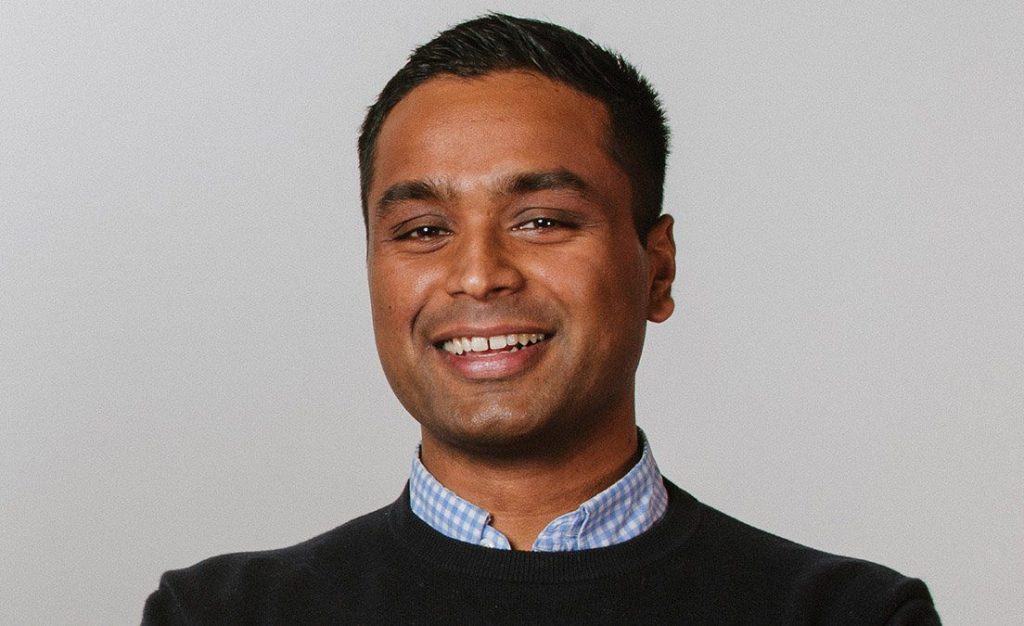 How would you describe where your company is and what products you’re developing?
Very simply, we’re creating the open standard hardware and software interface between the human nervous system and AI. It’s a hardware that looks at and analyses the input and output signals of our nervous system. As a neural interface company, we developed an amputee product that’s going into clinical trials soon. It was first designed by my co-founder and me about five years ago, just before the company started.

Since then, we’ve used early versions of the neural interface to generate lots of data about how the body is communicating with not just limbs, but also other organs. It is really a poorly-understood fact that all of our internal organs are governed by our nervous system – our heart or liver don’t operate independently, it’s an orchestra conductor-type of relationship for the unconscious part of our brain looking after all the different organs and keeping us alive; that’s something that there was very little data about, but it’s one of the root causes of chronic long-term disease.

For the past two to three years, we’ve been the largest generator of data in the world for the interaction of the nervous system with organs, and now we’re looking at using these datasets to build treatments for a whole range of internal conditions. Things are opening up now in the sense that we can spend the next couple of years prototyping really advanced automatic treatment. We call it ‘neuroceuticals’: basically, replacing a drug with an algorithm that can be delivered neurally.

Our company has been operating for four years which gives us a fundamental advantage; we’ve been building a multi-purpose platform for developing new treatments that we think in the long run will change the paradigm on what it means to live with long-term health conditions. Ideally, these conditions will be removed for huge groups of people.

How are you collecting the information – do you have devices placed in strategic points? If, to use your metaphor, it is like an orchestra, how do you find the sheet music of the individual instruments?
It is possible, with a lot of processing power, to disambiguate the neural signals. How we achieve that specifically is part of our secret sauce, but the actual chip goes in one place or can go in one region. We see a big acceleration of what we can do with neural technology.

The nervous system is a very messy biological code, but the good thing is that when you understand it, it actually makes sense when using types of signal processing – AI allows us to turn it into useful code. It’s one of the more positive uses of AI in a medical context – you couldn’t train a person to read the information.

What diseases do you see as being treatable by your technology?
The scope of neural treatment is quite large and not defined by us as a company. It can target a lot of different conditions, for example, diabetes, arthritis and even cardiac conditions. A very famous cardiac researcher published a book about 10 years ago that detailed how the disease that you see in the failing heart patient (who has 3-6 months to live without a transplant) really turned up six months earlier in the nervous system. Primarily, it’s all about finding novel, super-powerful targets for the autonomic nervous system.

One notable scientific result, for instance, is a case of a brain-dead patient in France in 2017. Brain-death is defined as when the brainstem is inactive. The group of researchers restarted the brainstem by sending neural impulses into it. There’s a big awakening of knowledge scientifically and there’s been a lot of movement and investment in trying to make that happen; we’re quite lucky to be an early player in that.

“For the past two to three years, we’ve been the largest generator of data in the world for the interaction of the nervous system with organs, and now we’re looking at using these datasets to build treatments for a whole range of internal conditions.”

It seems like one of your biggest challenges is brain plasticity between individuals. If different parts of the brain can be used for the same thing by different people, how generalisable is this data? Can you find it for one person and then apply it to more than one?
The way that we achieve the decoding and the process means it’s very generalisable. Because we are specific even in the way we manage to decode the data, we have to allow for the fact that we will see the same signal represented in a whole number of ways in one person. On a millisecond timeframe, you can have different movements of different neurons and on a weekly timeframe, you get other types of noise. The reality is that it takes a lot of calibration and that’s been a big barrier. How do you make it basically widely available? How do you get the technology to every clinician, every person, so they can use it? And that’s something we’re hoping we can improve upon, just by using this very standardised, big data machine learning approach to understanding the nervous system.

How far would you say that we are from seeing neural interface technology on the market?
In targeted uses, there’s already stuff that’s available – small scale availability can be found now if you look for it. This is fully implanted stuff for quite serious conditions. In terms of quality connection and high resolution, our company’s mission for the next year is to fit the first group of people with very high resolution, very capable neural interfaces. We will probably begin to see a general trend that will, over the next five years or so, expand in this area. This will be due to the efforts of our campaign and others in the space. After 8 years, I imagine that is when the acceleration will happen and when you will start to see some public companies pushing their own.

What would the technology look like?
I think the first distinction to draw is invasive and non-invasive. There’s definitely a place for the non-invasive consumer products that you can put on and take off – like headsets, augmented reality glasses without the lenses, that kind of thing. Some electrical optical or similar systems are highly integrated and close to the nerves that come out of the brainstem or are around it.  Some people are trying to work on very small ones that are heavily distributed internally, but that is many more years in the future.

Effectively, you have a lot of different ways in which the product can be developed and all of that ends up being the design choice of the company or specific to the treatment type.

There are already some products that look at chronic pain where the entire product is very close to the back where the nerve damage or the troublesome nerve activity is. From there it’s effectively wireless; the system neural implant is chirping away, but no-one really sees.

However, when the doctor wants to check how it’s going, they have wireless access to it and the patient can stimulate – it’s a kind of read-out. It can be subtle. For some applications there can be a small contact crossing the skin  – it’s no worse than getting an ear pierced.

Do you have to find a kind ‘Fort Knox’ way of encrypting the implant for protection and privacy reasons?
There is a  lot of news at the moment about hackable pacemakers, which, due to their wireless re-programming don’t have much security; it’s a problem for everyone. In the neural space, we are trying to help; as a company, BIOS is trying to attack the problem by setting standards and the way in which we develop so that we can work with the rest of the industry to build better security. One of the responsibilities of the developer is to explain things to you first, before the clinician or before any dystopian scenarios.

Where would you say most of your investments come from?
I’d say there’s been an awakening to bioelectronics and neuroceuticals resulting in a bio-med investor set investing in what we do. We’re hoping the impact we develop has a trickle-down or trickle-sideways effect so that other people can use and build more treatments to amplify our impact on health. If that resonates with them then that’s beautiful as well. We’re not far away from clinical trials and able to access more conventional funding sources. Our first funding came from a foundation in 2015 and since then there have been criss-cross technology investors who see the use of data, particularly machine-learning technology that opens up a new platform for the impact of software and AI.  We’re basically building a new connection to the body that is data and software first and this is interesting for them.

Then there’s a futuristic interest in bigger trends, like the shift to Longevity, plus the use of neural interfaces. I wouldn’t say they’re all futuristic investors; they tend to be more concentrated in the Silicon Valley area, but we found them all over the place. They can be very experienced angel investors who have really been in their own previous waves of huge new technologies that change our daily lives and shift the paradigm. These days, about 25-30% are looking with a Longevity lens because of what’s currently defined as Longevity is about new frameworks; evaluating, appraising and resourcing, as well as discussing technologies that are about addressing what will clearly be a growing demand for quality of life and healthspan technologies.

Do you see Longevity becoming a mainstream category? What timeframe would that be?
I think it’s still about 4-7 years away for Longevity and it’s going to be defined by market formation around that word – Longevity. Our company is a long way through that. From around 30-50 years old, people start to think about their future and make moves to arrest their decline in health. They start to see it as how it will drive their life and their interactions with their loved ones. That’s when you’re going to get to the billion minds kind of shift, that’s going to be the big force that manifests Longevity itself into this buzzword that people talk about.