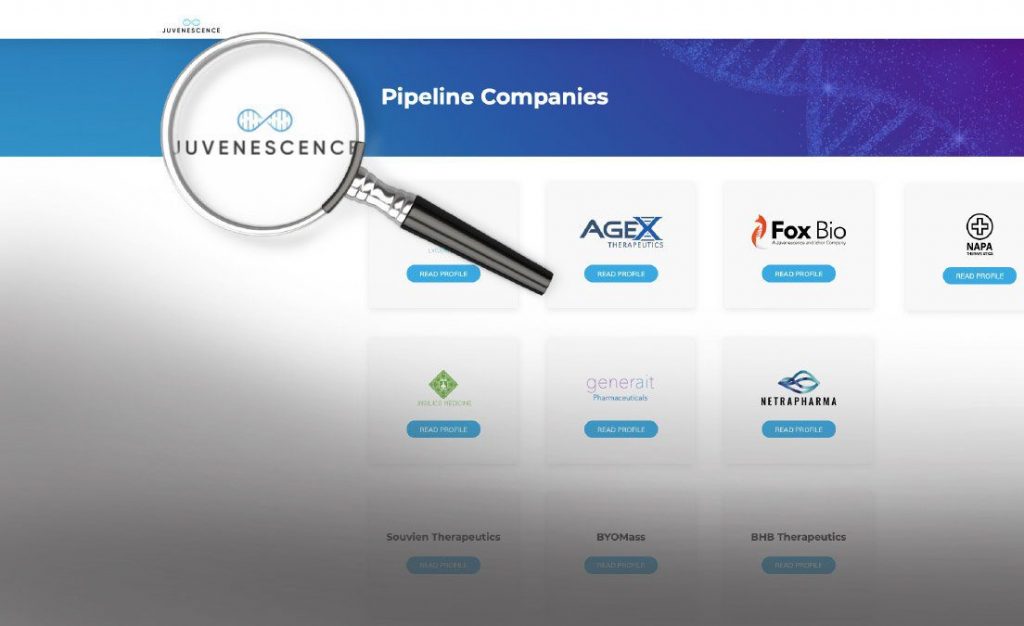 Leader in the longevity space, Juvenescence, is now valued at $500m, with an IPO coming in 2020.

It’s been another day, another 100 million dollars for the UK biotech Juvenescence, as they announced the closing of their series B funding round earlier this morning. This brings the valuation of the company to a total of $500m [1], $165m of which has been raised from rounds in the past 18 months.

The money will continue to be invested into the company’s growing portfolio of Longevity projects, which aim to produce therapies with the combined effects of extending healthy human lifespan to 150 years. An IPO is on the cards for next year.

Jim Mellon, British billionaire and chair of Juvenescence, leads the charge alongside co-founders Greg Bailey and Declan Doogan. The three have extensive experience in the field (Jim wrote a 400-page book on Longevity investing before founding Juvenescence, Greg and Declan are veterans in the industry, with respective stints at Medivation, Pfizer and Amarin).

But they also have a compelling case for other billionaires to boot, with investments in this most recent round including Mike Cannon-Brookes, Australian co-founder of Atlassian, and London-based founder of Nex Group, Michael Spencer.

This is all leading up to what Greg Bailey told Longevity.Technology was soon to be to be a “major inflection point,” in the therapeutic targeting of aging. “Things are about to accelerate exponentially based on two factors. One is the unlocking of the human genome, allowing us to understand protein-to-protein interaction better. The second is we’ve seen a tremendous jump in the quality of machine learning.”

Bailey was both referring to an industry-wide shift, and to one Juvenescence is spearheading by a joint venture with Alex Zhavoronkov’s machine learning company InSilico Medicine; Juvenescence invested $8.3m in InSilico during their first round. At the London Master Investor forum in April of this year, Alex Aliper, who is president of InSilico’s EMEA efforts, told Longevity.Technology that the venture consisted of using his organisation’s proprietary AI platform to discover novel targets for anti-aging drugs, before handing them over to Juvenescence for clinical testing.

Work with InSilico is only the beginning of the biotech’s ambitions. Juvenescence’s extensive portfolio of companies is broad, and extends across many different categories of nascent or just-emerged technologies. Mellon envisions tying these together into a “longevity ecosystem,” of inter-connected companies to be led by scientists, drug developers, and AI and financial experts. From among the 15 total invested companies so far, the largest two investments are those put into AgeX Therapeutics and FoxBio, who have therapies for age-related sickness based upon stem cells and senolytic drugs, respectively.

Of the prospects in their portfolio, the closest to entering clinical trials is LyGenesis, a company that specialises in liver regeneration by using patient thyroid systems to grow ectopic livers. Michael Hufford (CEO of LyGenesis) shared in Bailey’s enthusiasm surrounding Lygenesis’s efforts, which they envisage will see them entering human trials by the first half of 2020. “Here in the US, out of every 11 patients, 10 of them will be too sick or have too many comorbidities for them to get on a liver transplant list,” he told us. “That’s a huge unmet need, and we think our therapy will be the first line solution for patients in that category.”

More recently, Juvenescence has also founded Souvien Therapeutics, which aims to create medicines for neurodegenerative diseases, and placed $6.5 million in equity financing into a preclinical metabolic disease biotech called BYOMass. These follow the February announcement of a joint anti-aging venture with the Buck Institute that was dubbed BHB Therapeutics. The new organisation has been built to investigate the healthy aging benefits surrounding cell ketosis – a subject the Buck’s CEO Eric Verdin is an expert in – “We’re hoping to test the hypothesis that you can replicate the beneficial effects of a ketogenic diet by simply taking one of the major molecules the body releases to trigger its effects. That way people can stay on a normal diet and still reap the rewards,” he said to Longevity.Technology.

Juvenescence is the world’s best-funded Longevity platform. Their closest competitor is Life Biosciences, which operates a central research lab in Boston from which their various portfolio companies coordinate. Life Biosciences completed a series B round of $50m in January, and appears to be moving in close step with Juvenescence in the race to capture the young, but rapidly accelerating market.

Others are also entering the space – Sergey Young, of XPrize and Bold Capital partners fame, unveiled a $100m fund for the same purpose in February 2019, and Google has also followed with a Calico-AbbVie collaboration that sits at a hefty $1bn.

According to Mellon, Juvenescence should have its IPO next year, with a couple of yet-to-be-announced UK deals to precede it. This is all inside a Longevity market that the Bank Of America has forecast will expand from its current $110bn to a whopping $660bn by 2025. “We are going to have multiple shots on this goal,” says Mellon, “Much more than any other company invested in this field. If two or three of them are right, there will be a very good return for shareholders.” [2]