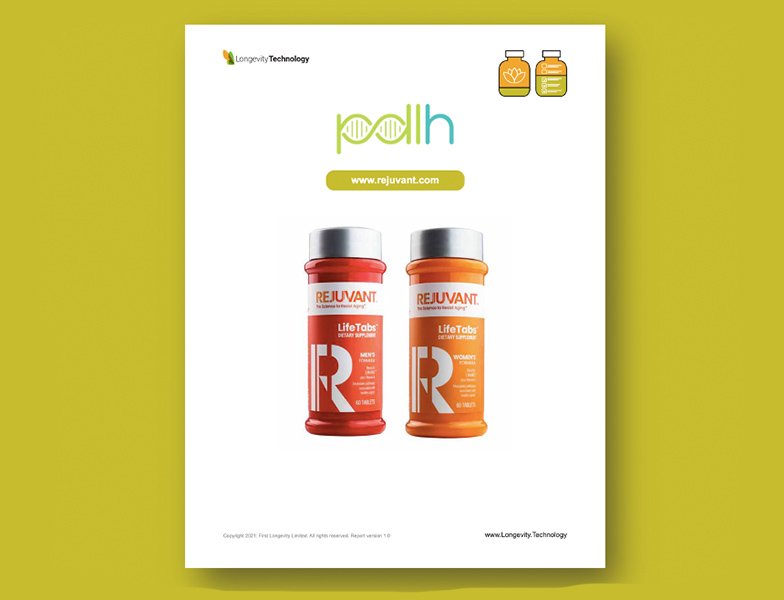 The company behind Rejuvant, which partnered with the Buck Institute for Research on Aging on its calcium alpha-ketoglutarate longevity supplement.

Over the coming weeks, we will be bringing you extracts of 11 company profiles from our Longevity Supplements Report. Each profile includes an assessment of Pre-Clinical and Clinical Studies, Safety and Risks, Target Market and Success Factors and the target Hallmark(s) of Aging for one of their key products.

We also study each of the companies’ IP, team, UVP, product efficacy, competitive advantage, runway and inflection point, and much more. Here’s the lowdown on Ponce de Leon Health.

Ponce de Leon Health Inc. (PDLH) is a science driven longevity company, specifically focused on reversing epigenetic aging, as measured by DNA methylation testing. The company has spent approximately $10m over the last 7 years developing Rejuvant® by partnering with the Buck Institute for Research on Aging.

The Buck Institute has performed several multi-year mouse trials for PDLH, testing combinations of compounds commonly believed to extend mammal lifespan. Nearly all have no effect individually and are not additive in combination. This thorough, long and expensive process resulted in the creation of Rejuvant.

Tom Weldon is the founder, chairman and CEO of PDLH. He has created over $2b of shareholder exit value in the companies he has personally founded. As an entrepreneur and venture capitalist, he has been fascinated with the longevity space for over a decade.

Several years ago, he joined the advisory board for the Buck Institute to get closer to the science. After reviewing the individual scientific programmes underway there, he concluded that their development timescales were too long and that they were also expensive. Weldon wanted to develop and commercialise a product that could benefit his parents, who were already in their 80s.

This led to the development of a business strategy focused on a non-prescription solution comprised of known dietary supplement and food ingredients, which could be brought to market quickly, and sold at a price-point that is equivalent to a daily coffee beverage at a national chain. As Dr Brian Kennedy, Chief Scientific Officer at PDLH, eloquently stated “We are not looking to extend the lives of billionaires, but to extend the lives of billions.”

Rejuvant is a patent pending (8 patents filed), male and female formulations and is the result of years of development in three different models – including humans. PDLH consider it to be the only commercial product that has shown to increase lifespan, disproportionately extend healthspan and compress morbidity in the mouse model.

This work was published in Cell Metabolism in September 2020 and stated that pilot research data has shown that Rejuvant can reverse biologic aging, as measured by DNA methylation testing. The company sells its product exclusively direct to consumer on the internet and is available for purchase at Rejuvant.com. However, it is understood to be in active discussions about exclusive distribution rights in several foreign countries.

The company is also in discussions with multiple global branded consumer product companies about various relationship agreements. PDLH does not publicly disclose any sales or profit figures.

PDLH manufactures Rejuvant LifeTabs®, containing LifeAKG™, in the US. LifeAKG is produced in an FDA registered pharmaceutical cGMP, ISO-9001 and ISO-1401 facility. PDLH states that its product contains the highest purity of commercially available Calcium Alpha-Ketoglutarate. The LifeAKG and nutrients are tableted with a proprietary, controlled-release matrix, to ensure optimal absorption and best replicate conditions of the study conducted by the scientific team at the Buck Institute.

Access to the report and a FREE executive summary can be found here, and check out our other supplements company profiles here.