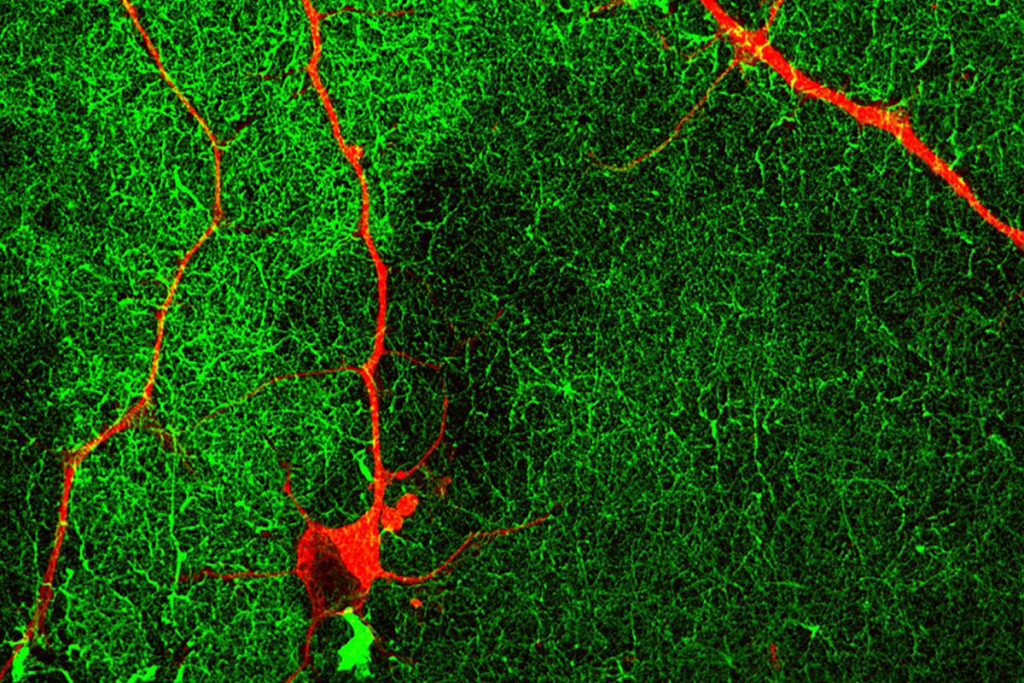 Researchers used “dancing molecules” to advance the age of human neurons beyond what was previously possible.

Longevity.Technology: Although previous researchers have differentiated stem cells to become neurons, those neurons were functionally immature, resembling neurons from embryonic or early postnatal stages. The limited maturation obtained with current stem cell culture techniques diminish their potential for neurodegeneration studies, so researchers at Northwestern decided to dance to a different tune, creating mature neurons that will enable the research of adult-onset diseases in relatively simple and cost-effective cell cultures.

In order to create mature neurons, the research team used “dancing molecules,” a breakthrough technique introduced in late 2021 by Northwestern professor Samuel I Stupp [1]. The team first differentiated human iPSCs into motor and cortical neurons and then placed them onto coatings of synthetic nanofibres containing the rapidly moving dancing molecules.

Not only were the enriched neurons more mature with enhanced signalling capabilities, they also demonstrated greater branching ability, a quality necessary for neurons to make synaptic contact with one another. In addition, unlike typical stem cell-derived neurons which tend to clump together, these neurons did not aggregate, making them less challenging to maintain [2].

Writing in Cell Stem Cell, the researchers believe that with further development, these mature neurons could be transplanted into patients as a promising therapy for spinal cord injuries as well as neurodegenerative diseases, including amyotrophic lateral sclerosis (ALS), Parkinson’s disease, Alzheimer’s disease or multiple sclerosis.

The mature neurons also present new opportunities for studying neurodegenerative diseases like ALS and other age-related illnesses in culture dish-based in vitro models. By advancing the age of neurons in cellular cultures, researchers could improve experiments to better understand late-onset diseases.

“This is the first time we have been able to trigger advanced functional maturation of human iPSC-derived neurons by plating them on a synthetic matrix,” said Northwestern’s Evangelos Kiskinis, co-corresponding author of the study.

“It’s important because there are many applications that require researchers to use purified populations of neurons. Most stem cell-based labs use mouse or rat neurons co-cultured with human stem cell-derived neurons. But that does not allow scientists to investigate what happens in human neurons because you end up working with a mixture of mouse and human cells [3].”

“When you have an iPSC that you manage to turn into a neuron, it’s going to be a young neuron,” said Stupp, co-corresponding author of the study. “But, in order for it to be useful in a therapeutic sense, you need a mature neuron. Otherwise, it is like asking a baby to carry out a function that requires an adult human being. We have confirmed that neurons coated with our nanofibers achieve more maturity than other methods, and mature neurons are better able to establish the synaptic connections that are fundamental to neuronal function [3].”

To develop the mature neurons, the researchers used nanofibres composed of “dancing molecules”, a material that Stupp’s lab developed as a potential treatment for acute spinal cord injuries. In previous research, Stupp discovered how to tune the motion of molecules, so they can find and properly engage with constantly moving cellular receptors; by mimicking the motion of biological molecules, the synthetic materials can communicate with cells [1].

A key innovation of Stupp’s research was discovering how to control the collective motion of more than 100,000 molecules within the nanofibres. Because cellular receptors in the human body can move at swift rates – sometimes at timescales of milliseconds – they become difficult-to-hit moving targets.

“Imagine dividing a second into 1,000 time periods,” Stupp said. “That’s how fast receptors could move. These timescales are so fast that they are difficult to grasp [3].”

In the new study, Stupp and Kiskinis found that nanofibres tuned to contain molecules with the most motion led to the most enhanced neurons. In other words, neurons cultured on more dynamic coatings – essentially scaffolds composed of many nanofibers – were also the neurons that became the most mature, least likely to aggregate and had more intense signalling capabilities [2].

“The reason we think this works is because the receptors move very fast on the cell membrane and the signaling molecules of our scaffolds also move very fast,” Stupp said. “They are more likely to be synchronized. If two dancers are not in sync, then the pairing doesn’t work. The receptors become activated by the signals through very specific spatial encounters. It also is possible that our fast-moving molecules enhance receptor movement, which in turn helps cluster them to benefit signaling [3].”

Neurons with ALS signature provide new window into the disease

Stupp and Kiskinis believe their mature neurons will give insights into aging-related illnesses and become better candidates for testing various drug therapies in cellular cultures. Using the dancing molecules, the researchers were able to advance human neurons to much older ages than previously possible, enabling scientists to study the onset of neurodegenerative diseases.

As part of the research, Kiskinis and his team took skin cells from a patient with ALS and converted them into patient-specific iPSCs. Then, they differentiated those stem cells into motor neurons, which is the cell type afflicted in this neurodegenerative disease. Finally, the researchers cultured neurons on the novel synthetic coating materials to further develop ALS signatures. Not only did this give Kiskinis a new window into ALS, these “ALS neurons” also could be used to test potential therapies [2].

“For the first time, we have been able to see adult-onset neurological protein aggregation in the stem cell-derived ALS patient motor neurons. This represents a breakthrough for us,” Kiskinis said. “It’s unclear how the aggregation triggers the disease. It’s what we are hoping to find out for the first time [3].”

Further down the road, iPSC-derived mature, enhanced neurons also could be transplanted into patients with spinal cord injuries or neurodegenerative diseases. For example, physicians could take skin cells from a patient with ALS or Parkinson’s disease, convert them into iPSCs and then culture those cells on the coating to create healthy, highly functional neurons.

Transplanting healthy neurons into a patient could replace damaged or lost neurons, potentially restoring lost cognition or sensations. And, because the initial cells came from the patient, the new, iPSC-derived neurons would genetically match the patient, eliminating the possibility of rejection.

“Cell replacement therapy can be very challenging for a disease like ALS, as transplanted motor neurons in the spinal cord will need to project their long axons to the appropriate muscle sites in the periphery but could be more straightforward for Parkinson’s disease,” Kiskinis said. “Either way this technology will be transformative [3].”

“It is possible to take cells from a patient, transform them into stem cells and then differentiate them into different types of cells,” Stupp said. “But the yield for those cells tends to be low, and achieving proper maturation is a big issue. We could integrate our coating into large-scale manufacturing of patient-derived neurons for cell transplantation therapies without immune rejection [3].”