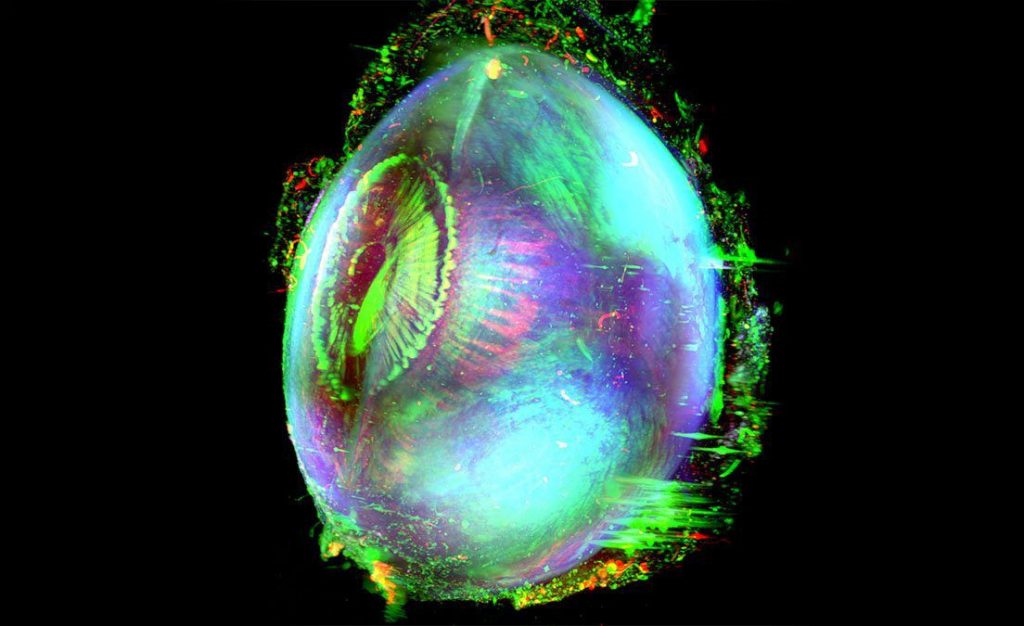 A new breakthrough has created transparent organs which could support improved organ growth and solve the global organ donation crisis.

We often hear calls for greater transparency about all sorts of things – but not usually when it comes to the human body. A team of German scientists have developed a way to make organs transparent [1]. On the face of it, it could be hard to fathom what the purpose of the research could be. But the breakthrough could eventually pave the way for the creation of organ growth for artificial human organs for transplant.

… the whole organ is scanned so that it can be mapped at a cellular level, meaning that researchers can capture the smallest of details …

The research team, headed up by Ali Erturk of Munich’s Ludwig Maximilians University, have created a method that uses a detergent known as CHAPS, before adding further solutions to make organs transparent (see the eye picture above). Following this procedure, dye is added and the whole organ is scanned so that it can be mapped at a cellular level, meaning that researchers can capture the smallest of details, including exactly where every single blood vessel and cell sits within the structure.

While obviously medics can currently get a picture of brain activity by using an MRI scan, in order to really discover what is happening at a cellular level, it is normally necessary to section the brain. The real breakthrough about this new method is that researchers can keep an organ completely whole while getting to see every tiny detail. The technique could one day pave the way for the creation of organs such as kidneys or hearts in the lab.

“Detailed knowledge about the cellular structure of human organs brings us an important step closer to creating functional organs artificially on demand.”

Neuroscientist and research lead Ali Erturk said: “There is a huge shortage of organ donors for hundreds of thousands of people. The waiting time for patients, and transplantation costs are a real burden. Detailed knowledge about the cellular structure of human organs brings us an important step closer to creating functional organs artificially on demand.”

One of the major challenges in the drive up-to-date to grow organs in the lab has been how scientists ensure that each part of the organ has the blood flow it needs to survive. Being able to chart, with pinpoint accuracy, how this vascularisation occurs in each organ could bring scientists closer to being able to develop viable human organs in the lab. As we have already reported, the recreation of blood vessels has been a challenge in this space.

This follows earlier research from Erturk’s team, who created transparent mice in the lab, in a study which revealed a number of interesting structural links between organs, including some new insight about how brain injuries affect the immune system. [2]

It also builds on varied studies aiming to solve the major global issue of organ shortage. It is estimated that only 10 per cent of necessary organ transplants are currently carried out. [3]

As reported earlier by Longevity.Technology, scientists in China have revealed they are moving towards being able to create viable organs for transplant by genetically-modifying pigs. Meanwhile, scientists in Japan have developed a method to grow heart muscles in the lab. This new 3D mapping technique adds to a growing body of exciting research in this field.