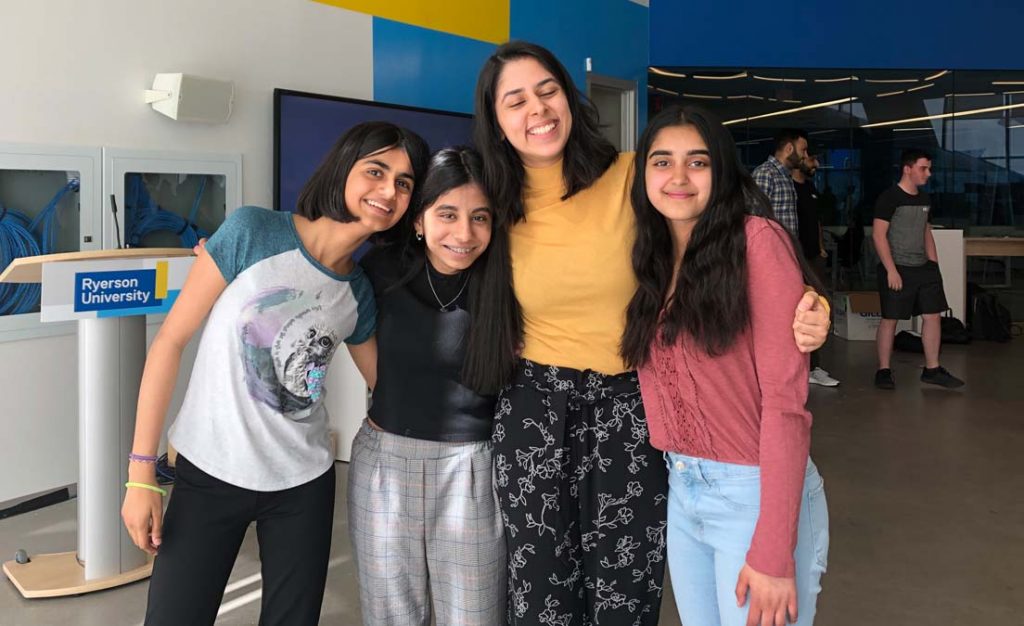 Nina Khera (pictured above, first left) became interested in the challenge of human longevity while participating in The Knowledge Society in Toronto, an innovation incubator for teenagers.

The 13 year old quickly became obsessed with the subject and this brought her together with three colleagues (aged between 13-17) to form Biotein, a start-up focused on finding a ‘cure for aging’.

Longevity.Technology: It’s a levelling thought; when the members of this team are in their 50s it’ll be the 2060s and it’s inconceivable to many that proven Longevity therapies won’t exist by then. So with their feet firmly on the shoulders of giants, we chatted with Biotein’s CEO, Nina Khera:

“This all started with a simple research proposal drafted in March 2019,” says Khera. “Soon, we began to expand and take in more proposals as well as more members, which led us to where we are today.”

“Right now, we are working on many projects,” she adds. “We have two main projects: Finding the cure for EBS-DM using heat shock proteins, and finding phenotypes of the mitochondria of senescent cells using AI. For the former, we aim to raise money and finalize a discussion with a lab. For the latter, we aim to finish the analysis very soon and look at the possibility of a clinical screen.”

Khera explains that Biotein is already in “a few” crowdfunding competitions, and aims to raise in the realm of $10K for each project. Great value.

The AI project came about after Khera read a research paper and realised there was no universal phenotype (cell trait) for senescent cells. She wondered if she could use AI to find one and this led to the development of a research proposal to examine the mitochondria of both senescent and proliferating cells, in the hope of finding a consistent phenotype for replicative senescence.

“We are using our own algorithms and our own datasets,” says Khera. “We are looking at CNNs, and autoencoders, to use for analysis of our datasets (finding key features of the images).”

Biotein has also expanded its focus into other areas, including looking at the effect of senolytics on the epigenome of certain genes associated with senescence.

“We are focusing on neurodegenerative and cardiovascular diseases specifically,” says Khera. Although she is clear that senolytic therapies still have some way to go before people start using them.

“We would not recommend them to anyone just yet,” she says. “The research pertaining to senolytics and senescent cells is not advanced enough that we would think the supplements are safe or confirmed to work fully. Senolytics need to have more peer-reviewed studies, and that’s when we would recommend them.”

While all the team members are still also in full-time education, it is clear that these teenagers are also fully committed to their passion to combat aging with science.

“We use a lot of time-management techniques to make sure we are using our time properly,” Khera explains. “We have to-do lists, and we put our free time into our work with the company. Time-boxing helps a lot for time-management, and it is a value we try to reinforce.”

Having developed such an early interest in solving the Longevity challenge, we can’t help but wonder if Nina’s following in the footsteps of a certain Laura Deming.