News > BiotechOrganoid to the rescue of the thyroid

Organoid to the rescue of the thyroid 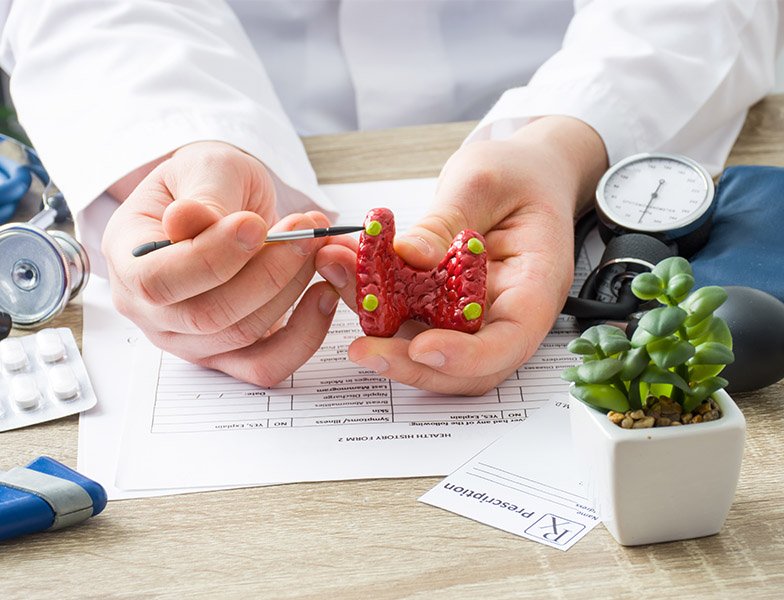 Sci-fi or reality? Artificial organs may soon be the solution for those suffering from all forms of hypothyroidism.

The role of the thyroid gland is absolutely crucial for human health. Located in the neck, it controls metabolism, growth and development by secreting the two thyroid hormones: triidothyrnine (T3) and tetraiodothyronine (T4). Imbalance of these hormones can affect cognition and make you hangry, cold and extremely tired. Could artificial organs be the key?

Longevity.Technology: Hypothyroidism occurs when thyroid hormones are not being produced to the required level. This can occur though radiation, thyroid autoimmunity and as a side-effect of thyroid cancer treatment – the complete removal of the organ.

All of these require life-long hormone replacement therapy, which not only has shown to give severe gastrointestinal side-effects, but also interact with many other drugs. This poses a problem the vast majority of people who need to take multiple drugs for different conditions. Replacement therapy itself is imperfect, resulting in the persistent hormone imbalance symptoms.

As medicine takes leaps forwards, a new and exciting solution may lie in the field of regenerative medicine. Full organ growth is a long way off, but smaller organs are gaining traction, and already we are seeing studies showing clear viability of artificially grown organs, knowns as organoids, replacing diseased organs. Just a year ago, a key study developed salivary gland tissue from human stem cells as treatment for salivary gland diseases [1] and consequently transplantation into mice models indeed lead to the rescue of the organ’s functions [2].

This is just an example, but similar studies have been done for kidney [3], liver [4] and endometrium [5] organoids and LyGenesis is one company actively progressing an organoid pipeline. Now, a novel thyroid organoid has been grown by Professor Rob Coppes at the University Medical Center of Groningen in the Netherlands.

The organoid was grown through standard biological procedures and thoroughly characterised through numerous biological experiments. When cells are grown, part of the procedure involves passaging, where the growing cells are removed from the medium they are in and transferred into fresh medium. This is done to ensure maximal cell growth and prevent toxic metabolites from building up. In this case successful passaging suggested the organoid had cellular integrity and stability.

The developed thyroid organoids show a lot of promise. Practically, they can be cryogenically stored, they have genetic stability and cellular integrity.

For successful T3 and T4 production, a working sodium iodide symporter is imperative along with epithelial integrity and tight junctions. Even after 5 passages, the novel thyroid organoid is viable and stem cell enriched, and thus was transplanted to see in vivo effects on a murine model.

Hypothyroidism was induced in mice by injecting them with the radioactive iodine isotope 131I: T4 serum levels were then measured to confirm thyroid function loss. 600,000 organoid cells were transplanted into the kidney capsule of the mice.

Can hyperthyroidism be cured?

After 8 weeks the organoid developed characteristic follicles, from which thyroid hormones are secreted. Over 29 weeks the organoid grew in size and the follicles remained present. Even though T4 levels increased at a modest rate, lifespan of the hypothyroid mice was prolonged relative to the control group showing clear longevity benefits.

The organoids showed an increase in proliferation and an increase in cell cycle activity – both criteria that also define a cancerous cell. Yet, no thyroid tumour markers were found. The transplanted cells were also not able to form tumours even after long-term culturing and being irradiated, which is a known causative trigger for cancer. This does not guarantee elimination of cancer risks, but rather shows that they are minimal [6].

The developed thyroid organoids show a lot of promise. Practically, they can be cryogenically stored, they have genetic stability and cellular integrity. Furthermore, being developed from adult thyroid cells rather than embryonic stem cells overcomes most current legal barriers in regenerative medicine.

Future studies could look into exploring different variables. Implanting more cells and triggering more extensive vascularisation could lead to better hormone production and faster engraftment of the organoid. Additionally, a similar study found that the addition of human thyroid-stimulating hormone (TSH) to thyroid organoid culture is pivotal for restoring T3 and T4 hormone levels [7]. The role of TSH could be tested in the newly validated thyroid organoid.

The evidence in the study shows that thyroid-derived cells can form a functional thyroid mini-organ, and the potential benefit to people suffering from hypothyroidism is so great that this model required funds and effort for development to a therapeutically sound standard.