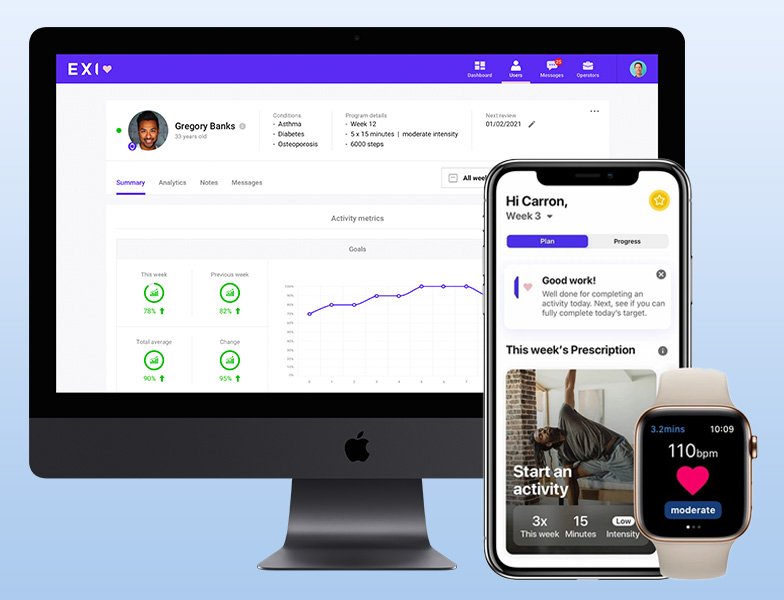 British start-up EXi is making waves with its app for prescribing personalised activity programmes. The app provides programmes that address any combination of 23 health conditions, including diabetes, heart disease and depression.

Longevity.Technology: Exercise is one of the few longevity therapies that has delivered proven results in humans. Indeed, a few years ago, the UK’s Academy of Medical Royal Colleges dubbed it “the miracle cure”. But knowing exactly what exercise to prescribe for an individual can be difficult and EXi is addressing this challenge head on. We caught up with the company’s co-founder and clinical director Carron Manning to find out more.

Manning, a chartered physiotherapist for more than 20 years, founded EXi along with her husband Lewis, also a physio, after realising that exercise was not being properly considered in the treatment of chronic disease.

“I’ve been prescribing exercise for a long time, for people with all types of illnesses, injuries, all the way up to elite athletes – the full spectrum,” she says. “And we could see that there was a huge gap in terms of medicine for people with chronic diseases like diabetes, heart disease, hypertension and cancer. These people are managed primarily through drugs and medical based treatments, whereas the reasons that they are in that situation in the first place are often due to their lifestyle, diet, lack of activity, and a few other factors. But all of that is not really being addressed.”

The Mannings realised there was potentially a huge opportunity to target chronic disease with exercise, but that most doctors and general practitioners simply don’t have the training in physical activity to effectively prescribe it.

“We could see that technology was really starting to catch up with where we needed it to be,” she says. “So we thought we could actually do something about it, we could put everything together to make an intelligent, automated system based on medical guidelines. It had to be entirely robust and evidence-based, because clinicians will throw things out immediately if they aren’t evidence based – as I would.”

After spending around a year researching and developing a system, the company put together the first iteration of its app, which received positive feedback from Harvard University and ukactive in 2016.

“People could see that we were different, because it was the first app to do this,” says Manning.

The company then spent some years refining the product and building out its team, including bringing on board Grace McNamara as CEO, who joined from Apple where she led the company’s health and fitness strategic initiatives in Europe and the Middle East.

Fast forward to today, and the company has a robust, clinically validated app that tracks a wide range of metrics to deliver fully automated, highly personalised exercise programmes. With both iOS and Android apps, EXi can draw data from almost any wearable that puts data into Apple HealthKit or Google Fit.

“We are prescribing exercise in the same way as a doctor prescribes drugs, specifically for therapeutic purposes, to both help prevent and manage medical conditions,” says Manning. “We know, for example, that exercise will have a profound effect on blood pressure, on circulation, it helps to prevent certain types of cancer. This is the impact of exercise – no drug has ever been created, which has the same molecular or physiological effect as exercise.”

EXi’s programmes are based on the principle of exercise intensity. Working at the correct intensity level is key to enabling people with chronic conditions to exercise safely and to ensure they are getting the maximal health benefits.

“We know there’s a specific dose response with exercise, so we know exactly what the effects will be for any given population based on research,” says Manning. “We know how hard to push somebody safely, we know how effective it’s going to be on their medical condition. And we’ve done this for any combination of 23 medical conditions.”

Patients can download the app themselves to get started, but clinicians also have access via a dashboard where they can view all their patients in a single view. Health outcome measures are tracked on a weekly basis, including a GPS-enabled six minute walking test, resting heart rate, blood pressure, waist circumference, and BMI.

EXi is currently engaged in research projects with University College London, King’s College and others to prove its effectiveness and impact on patients’ lives, but also the potential economic impact. The app is free for patients and is currently available to healthcare providers at a nominal cost, while EXi works to prove that it can “fundamentally shift the needle on care delivery”.

While currently targeting some of the key national NHS frameworks in the UK, EXi also expects to enter the US market later this year or next, with the national Medicare and Medicaid programmes likely to be a key focus.

To date, EXi has raised around £1.5 million in angel funding, and expects it will need to raise another £1.5 – £2 million by the end of the year or early next year.