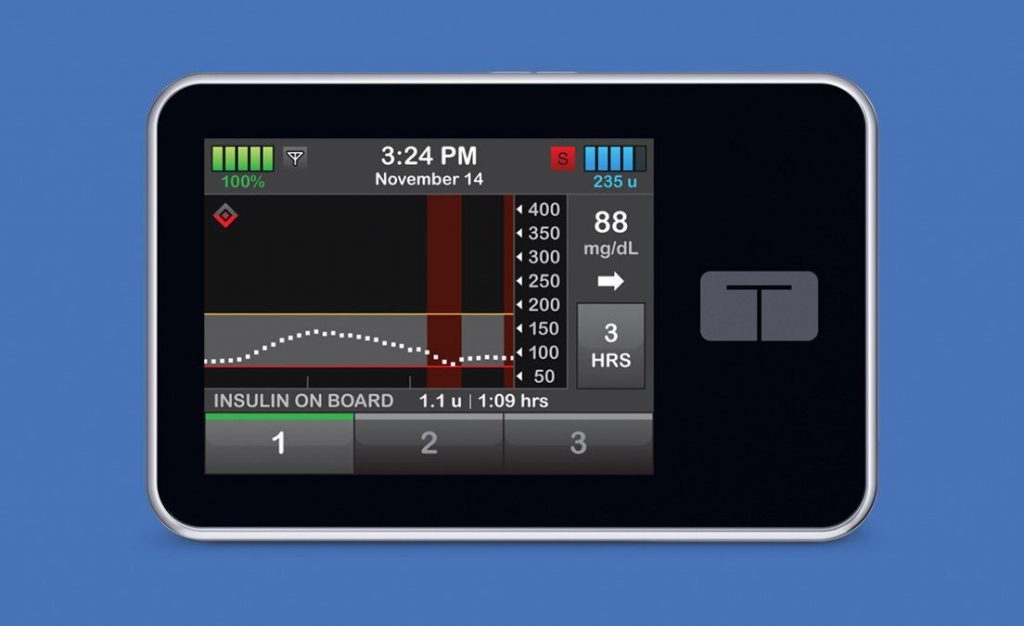 A clinical trial of an artificial closed-loop pancreas system, designed for 24-hour monitoring and regulation of blood-sugar levels, has found the system to be more effective than existing treatments for type 1 diabetes.

The study data has been submitted to the FDA for review. If approved, the new system will be second onto the market alongside another ‘closed-loop’ pancreas, Medtronic’s 2016 FDA-approved MiniMed 670G. Both systems monitor and regulate basal insulin, but as of yet no replacement exists for the manual administrations of ‘bolus’ insulin needed before meals.

Formed by connecting Tandem Diabetes Care’s insulin pump (to administer the insulin) with Dexcom’s G6 continuous glucose monitor (CGM) (to track blood-sugar levels), the ‘closed loop’ system has the immediate advantage of requiring no manual input from users. This allows for automatic administration of insulin while a patient is sleeping — a time at which blood sugar levels can otherwise drop to dangerously low levels.

Longevity.Technology: It is certainly a promising sign to see the ‘hybrid’ closed loop pancreas market beginning to take shape with a second device to compete alongside Medtronic’s MiniMed 670G. We track this more as a sign of market maturation, rather than a growth in the readiness of this technology, however, as this new device breaks no new ground in the tricky challenge of being able to administer bolus insulin injections before meals. In order to fully ‘close the loop’ and move biocybernetic pancreases away from manual control and towards the automatic behaviour of their biological counterparts, powerful AI systems that can accurately guess the wearer’s eating habits are needed. We have yet to receive much indication that these are close to arriving. We could score these devices with TRLs of 9 or 10 – if our only purported goal was to see devices on the market that monitor basal insulin – but as we’re measuring true success to be total integration:

The TRL score for the technology addressed in this article is: “Technology completes late stage trials and has all evidence to prove safety and efficacy.”

The research, conducted by the National Institute of Health (NIH) International Diabetes Closed-Loop (iDCL) [1] study and published in the New England Journal of Medicine, enrolled 168 participants aged 14 and above to monitor in real-world settings; fitting them with either an artificial pancreas system called ‘Control-IQ’, or a sensor-augmented CGM-pump combination that did not automatically adjust insulin throughout the day.

Comparing the Control-IQ group to the control group, those fitted with the new system were shown to have stayed within healthy ranges an average of 2.6 hours more than those without, with an additional decrease in the occurrences of sudden drops in insulin levels.

“This artificial pancreas system has several unique features that improve glucose control beyond what is achievable using traditional methods,” says co-lead author Boris Kovatchev. “In particular, there is a special safety module dedicated to prevention of hypoglycemia, and there is gradually intensified control overnight to achieve near-normal blood sugar levels every morning.”

Closed loop pancreases are emerging as powerful replacements to older methods, which rely upon testing by CGM or finger-stick followed by administration by injection or pump, as the predominant method of regulating type 1 diabetics’ basal insulin levels.