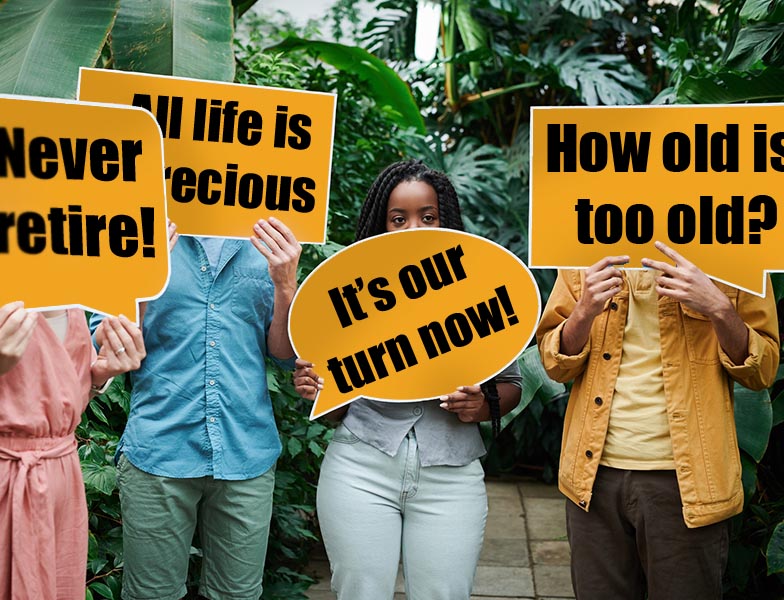 Longevity.Technology: Today we welcome a guest post from Javier García Arenas, a senior economist at CaixaBank Research, who frequently looks at the economic impact of the aging population.

Thanks to advances in medicine and a better quality of life, the quote by Quevedo, “We all want to live to an old age, and we all deny that we have reached it” could apply to any of us at one time or another.

Indeed, the aging of the population in advanced societies is a silent and unstoppable phenomenon that will have an undeniable impact on macroeconomic and financial variables … but not only that.

The aging of the population will have a much wider and more far-reaching impact that will shape the type of society we will live in, and it will pose a number of inescapable economic and social challenges. In this article, we will shed some light on this and other issues by analysing the impact of population aging on society, the kind of economy we will shift to, and the major challenges that we will face at the intergenerational level. 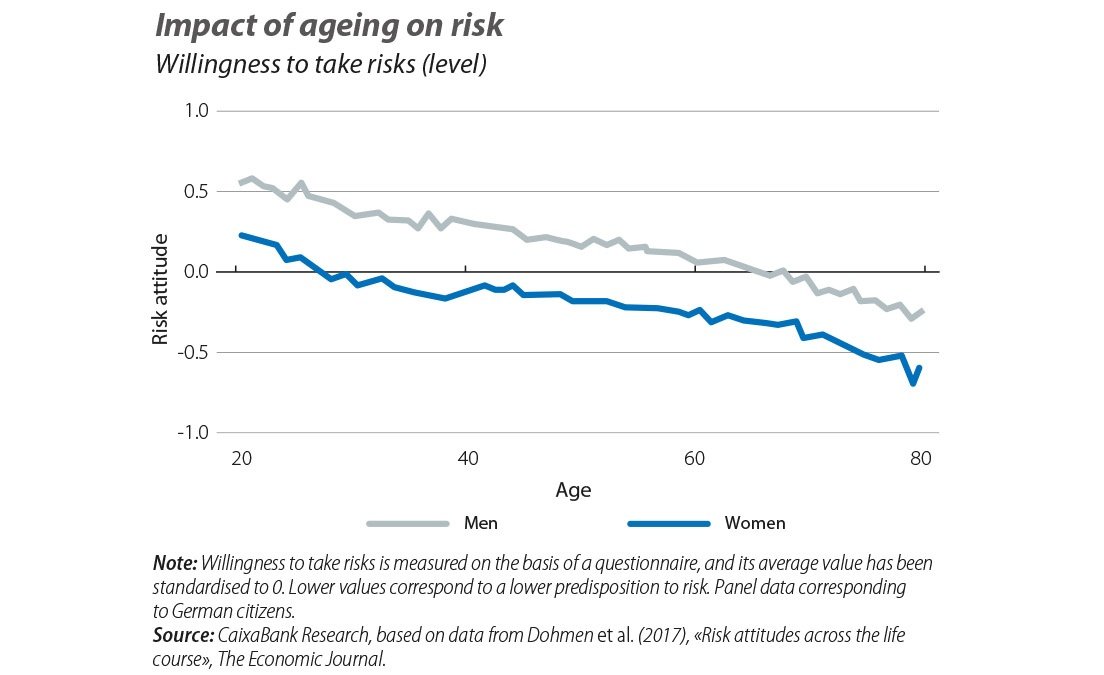 Let us start with the social sphere, a dimension that economists are taking increasingly seriously, given the important interactions between society and the economy. One of the most important issues to settle is how society’s preferences will change due to the greater relative weight of the more elderly generations. In a recent article, a group of economists [1] analysed the attitude towards risk among a group of German and Dutch citizens throughout their life cycle.

The conclusion of the study was clear: as we get older, we are less willing to take risks. Specifically, a 10-year increase in the median age of society substantially reduces risk-taking, equivalent to a reduction of 2.5% in investment in equities or of 6% in the number of people who are self-employed.

This implies that aging societies will possibly be more risk-averse, which can have a myriad of repercussions on people’s economic, political and social behaviour.

For instance, two economists from the University of Chicago, Lubos Pastor and Pietro Veronesi [2], have documented that support for populist parties is significantly higher among voters who are more risk-averse, as these voters take safer financial and consumption decisions and, therefore, are less sensitive to political and economic uncertainty.

A more risk-averse society can also have a significant influence on the speed of the technological change that we are witnessing. As an example, it has been documented that a greater relative weight of workers aged between 50 and 59 has a restricting effect on innovation, measured using the total number of patents [3].

However, it should be pointed out that the net effect of population aging on innovation and technology is still under discussion. The MIT economist Daron Acemoglu, for instance, has shown that in the industrial sector, robots are much better substitutes for occupations performed by middle-aged people than those of older people. Using this data, Acemoglu has found that in older societies – which therefore have a greater relative scarcity of middle-aged workers – more robots are used per worker [4]. Therefore, more aged societies such as Germany, South Korea and Japan have a greater demand for industrial robots than younger societies like the US or the United Kingdom. In fact, this gap could increase with the greater needs for automation in the healthcare sector in aging societies.

The aging of society will also have a significant impact on consumption patterns and the type of economy that will result from these changes.

The main feature of the “silver economy” – a term referring to the economy of people aged over 50 – is an expansion of the services sector, driven by greater healthcare requirements and also, potentially, by an increase in tourism and cultural activities in a society that will have to deal with the problem of loneliness (42% of people living alone in Spain are currently already over 65 years of age). Thus, the silver economy will provide new business opportunities and its relative importance will increase rapidly: according to the European Commission, this economy will contribute 6.4 trillion euros to the GDP of the EU by 2025 (32% of GDP), almost double today’s level, and it will generate 88 million jobs (38% of the total).

In addition, we must bear in mind that longer life expectancy will lead to people remaining active in the labour market and engaging in their occupations for longer. This will increase the need to tailor homes, workplaces and means of transport to these workers’ needs, so that they can live and work autonomously.

It should be noted that a significant portion of the silver economy will be related to healthcare and dependency. The European Commission estimates that public expenditure on items related to population aging will increase by 1.7 pps between 2016 and 2070 in the euro area, reaching 26.7% of GDP. However, there is great uncertainty regarding these types of estimates, since they depend on factors such as technology (advances in the field of healthcare are expected to be particularly powerful) and morbidity rates (will longer life expectancies mean more years of health or more older people living in poor health?). The mortality rate element is no less important: correctly controlling healthcare expenditure close to the time of death can reduce healthcare expenditure attributed to age by up to 40% [5].

Whatever the case, these greater public expenditure needs will have to be financed in some way, which could generate pressures and uncertainties in the tax system and the redistribution between generations. In the end, the consequences of population aging will depend on the type of taxation they affect: the intergenerational effects will be much greater if they fall upon social security contributions and income tax than if they fall on consumption. The debate surrounding which generation should bear the brunt of the tax burden will be bitter, and it could cause a generational gap between older and younger people if the public authorities fail to balance the interests of all the generations. Good sense among the policy makers will be crucial, since in a society with a higher prevalence of older people, it is quite possible that in electoral processes there will be majorities in favour of a very substantial intergenerational redistribution from workers to retirees.

In fact, it is worth bearing in mind that these trends in intergenerational redistribution have already begun to appear, as shown by two sets of data. The first is that, in the last 30 years in Europe, the disposable income of young adults (between 18 and 25 years of age) has fallen, for the first time, below the average income of the population as a whole. The elderly, meanwhile, have been the only age group to have seen an increase in their relative income. 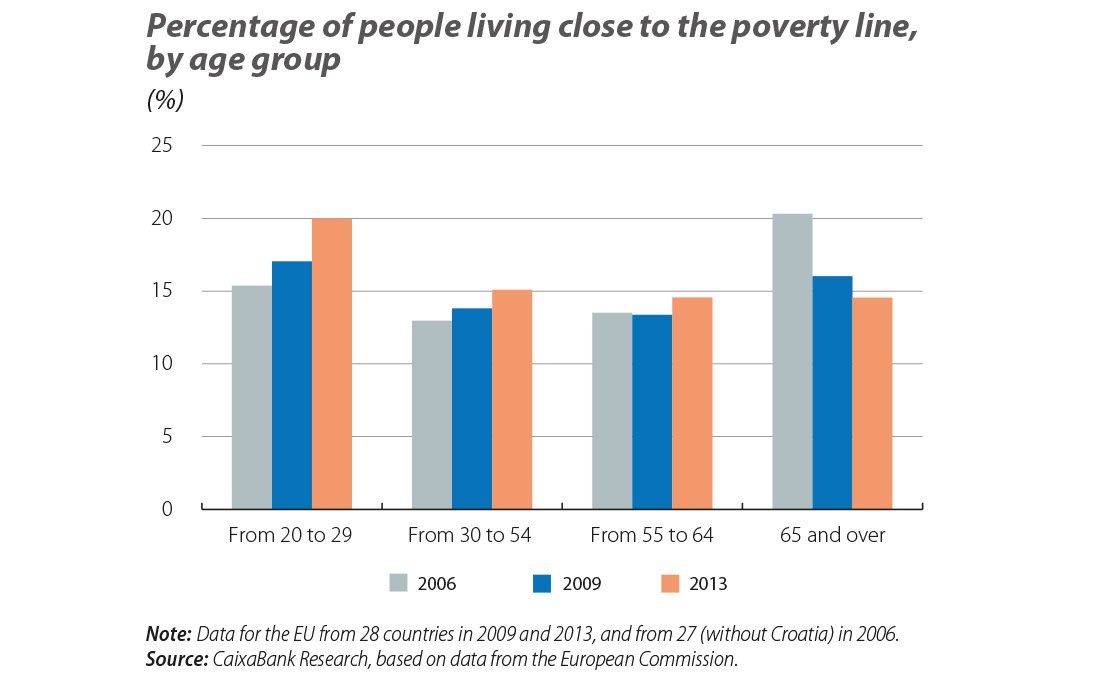 The second is that the percentage of elderly people living close to the poverty line in the EU has fallen from 20.3% to 14.6%, whilst on the other hand it has increased among all younger groups, which already have a higher percentage of people living close to the poverty line than those over the age of 65 (see chart above). These figures confirm the perception that certain problems related to intergenerational justice are already beginning to emerge, as a result of the difficulties young people are experiencing to join the labour market compared with older cohorts, who enjoy greater protection to cope with adverse economic shocks.

In short, the aging of the population is a phenomenon that is here to stay and which brings with it a litany of profound changes in the preferences of society, how to organise the economy and how to redistribute resources between generations. The challenges will be arduous, but the good news is that we have older generations who are full of plans and vitality and who will undoubtedly contribute to converting the aging of the population into an opportunity for our economies.

This article first appeared on the CaixaBank Research website.