News > BiotechUnlocking the origin of Alzheimer’s 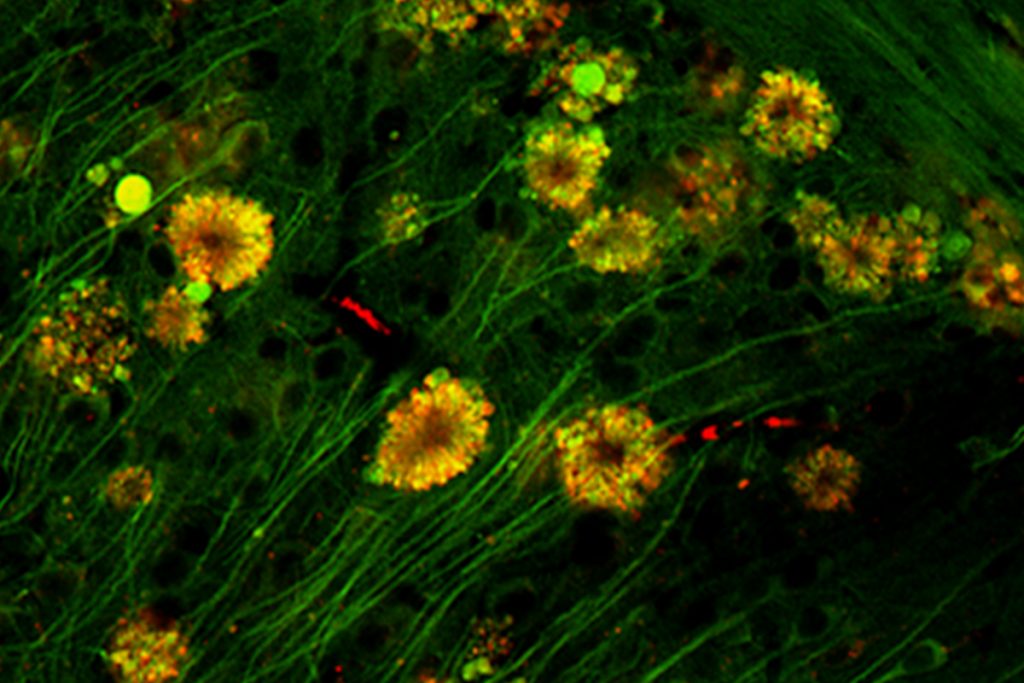 Evidence is mounting for alternate origins of Alzheimer’s disease plaques – and results could explain why drugs designed to remove amyloid deposits have failed to stop the disease.

A breakdown in how brain cells rid themselves of waste precedes the build-up of debris-filled plaques known to occur in Alzheimer’s disease, a new study in mice shows.

Longevity.Technology: According to the National Institute on Aging, more than 6 million Americans, most of them age 65 or older, have dementia, a progressive loss of thinking, remembering and reasoning, due to Alzheimer’s disease [1].

This debilitating disease is characterised by plaques of a naturally-occurring protein called beta-amyloid 42 clumping together. Alzheimer’s sufferers have abnormally high amounts of this protein, and the plaques that form as a result collect between neurons and disrupt cell function.

Research in this field has previously argued that these amyloid plaques build up outside cells as a crucial first step toward the brain damage observed in Alzheimer’s disease. However, led by researchers at NYU Grossman School of Medicine and the Nathan Kline Institute, a new study challenges this idea, known as the amyloid cascade hypothesis.

The latest study findings argue instead that neuronal damage characteristic of Alzheimer’s disease takes root inside cells well before these thread-like amyloid plaques fully form and clump together in the brain [2].

Publishing as the cover article in the journal Nature Neuroscience, the study traced the root dysfunction observed in mice bred to develop Alzheimer’s disease to the brain cells’ lysosomes. These are small sacs inside every cell, filled with acidic enzymes involved in the routine breakdown, removal and recycling of metabolic waste from everyday cell reactions, as well as from disease. Lysosomes are also key, researchers note, to breaking down and disposing of a cell’s own parts when the cell naturally dies.

As part of the study, researchers tracked decreasing acid activity inside intact mouse cell lysosomes as the cells became injured with the disease. Imaging tests developed at NYU Langone Health and Nathan Kline (to track cellular waste removal) showed that certain brain cell lysosomes became enlarged as they fused with so-called autophagic vacuoles filled with waste that had failed to be broken down. These autophagic vacuoles also contained earlier forms of amyloid beta.

In neurons most heavily damaged and destined for early death as a result, the vacuoles pooled together in “flower-like” patterns, bulging out from the cells’ outer membranes and massing around each cell’s centre, or nucleus. Accumulations of amyloid beta formed filaments inside the cell, another hallmark of Alzheimer’s disease. Indeed, researchers observed almost-fully formed plaques inside some damaged neurons.

“Previously, the working hypothesis mostly attributed the damage observed in Alzheimer’s disease to what came after amyloid buildup outside of brain cells, not before and from within neurons [3].”

“This new evidence changes our fundamental understanding of how Alzheimer’s disease progresses; it also explains why so many experimental therapies designed to remove amyloid plaques have failed to stop disease progression, because the brain cells are already crippled before the plaques fully form outside the cell,” says study senior investigator Ralph Nixon, MD, PhD, a professor in the Department of Psychiatry and the Department of Cell Biology at NYU Langone, as well as director of the Center for Dementia Research at Nathan Kline.

“Our research suggests that future treatments should focus on reversing the lysosomal dysfunction and rebalancing acid levels inside the brain’s neurons [3].”

Researchers say they are already working on experimental therapies to treat the lysosomal problems observed in their studies.

A recent study (published in April in Science Advances) by the NYU Langone team sourced one cause of the cell’s waste disposal problems to a gene called PSEN1. The gene has long been known to cause Alzheimer’s disease, but its additional role in causing the illness (through lysosomal dysfunction) is only now becoming clear.

Their recent work (which is covered by United States Patent 9,265,735) also showed that the neuronal damage in a PSEN1 mouse model of Alzheimer’s disease could be reversed by restoring proper acid levels in lysosomes.